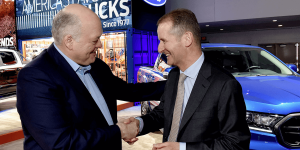 Ford and Volkswagen have already reached agreement on the pickup models, and now things are becoming concrete in the field of e-mobility as well: an important decision could be made next week and is likely to include the MEB platform.

The German Handelsblatt reports, VW CEO Diess intends to present his plans for far-reaching cooperation with Ford to the Supervisory Board for approval at the meeting next Thursday. Among other things, Ford will receive access to Volkswagen’s modular electrical construction kit (MEB) for a fee. Ford’s recent announcement that, in addition to the previous electrification plan for Europe, which mainly consisted of hybrid models, Ford would produce a whole family of battery electric vehicles in Europe, fits in well with this.

With the modular platform for electric cars and the planned high volumes, Volkswagen has created a good starting position among volume manufacturers. The “skateboard” module, which houses the battery, engines and chassis, can be tuned to give the electric cars a different character – from the sporty Audi to the more comfortable VW. The passenger cell (in the VW language “hat”), which is placed on the platform, can also be designed quite freely.

The price for this freedom: The development costs were in the billions. This makes sharing some of the development costs with Ford a prudent decision. Especially since the US company is under pressure in Europe. Since the hapless Focus Electric, there has been no fully electric model. The company also has its back to the wall in its core business: the current fleet, which is only selling slowly, to begin with, consumes too much. From 2021, there is an incoming threat of high fines in the EU. Without electric cars, Ford cannot reduce fleet consumption fast enough – the VW route would be the quickest way to more electric vehicles.

Already in January Ford and VW agreed on a joint production of pickups. Ford has been leading the American registration statistics for years with models like the F-150, while VW does not offer any of the flatbed models popular in the USA – the Amarok built in Germany is too small for the US market. Volkswagen wants to use Ford’s plants and experience to gain a foothold in this segment.

In the development of autonomous cars, too, Volkswagen is relying on the partnership that is beginning to develop with Ford: the Wolfsburg-based company ended its initially highly regarded cooperation with the US start-up Aurora in June. Instead, VW said that the talks with Ford would make “great progress”. There could still be an agreement with the startup Argo AI this summer, which Ford took over at the beginning of 2017, the Financial Times reported, citing unnamed persons.

handelsblatt.com, ft.com (Paywall, both in German)

VW: new info on e-Up with orders to open this year