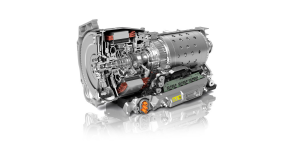 ZF has already received orders worth billions from BMW and Fiat Chrysler for the new eight-speed hybrid module automatic transmission. The supplier is now providing further details on the transmission.

A modular system makes it possible to implement mild, full, and plug-in hybrid drives with peak outputs of 24 to 160 kW. The power electronics are no longer designed as a separate unit, but are fully integrated into the transmission housing.

This is possible because ZF designed the transmission for hybridization right from the start. Until now, the torque converter of hybrid transmissions (also from ZF) was simply replaced by an electric motor with the highest possible power density. Since the transmission housing, which was originally designed for a converter, specified the design, previous automatic transmissions were severely limited in their electrical performance.

ZF claims to have “turned the tables” with the new transmission, as the housing was designed for a larger and more powerful electric motor. Nevertheless, the outer dimensions of the transmission do not increase: With a new, significantly smaller hydraulic control system, ZF claims to have succeeded in finding the installation space required for the electrical and electronic components.

Power electronics, which is now integrated into the transmission itself, also helps here. According to ZF, however, a new cooling system was necessary here because some of the power semiconductors can become very hot during operation. For car manufacturers, the integrated power electronics offer two advantages: On the one hand, they have to lay fewer high-voltage cables in the car, which increases safety. In addition, the power electronics, which previously had the size of a shoe box, no longer have to be installed in the car – according to the manufacturer, the assembly of the new hybrid transmission is no longer much more complex than that of a conventional transmission.

With the new electric motor (in addition to the mentioned peak power of 160 kW, ZF specifies a continuous output of 80 kW), the electric driving components of the PHEV are to be significantly increased. Even without the combustion engine, the maximum torque is 450 Newton meters – this should allow rapid acceleration even in pure E mode, for example during overtaking manoeuvres.

The transmission is not only designed for PHEVs, but also for mild hybrids with 48 V operating voltage. Here the electric motors are not located in the gearbox itself, but mostly on the crankshaft at the engine output (called P1) or as P2 on the gearbox input shaft.

ZF will start production of the fourth generation of the eight-speed automatic transmission in 2022, initially in Saarbrücken, Germany; shortly thereafter, the market launch in China and the USA will also take place. ZF has already found the first customers for the transmission: Only at the beginning of the month, the third-largest German supplier announced that Fiat Chrysler had placed a major order for automatic transmissions with hybrid components with ZF after BMW. Together with the order from BMW, the order volume adds up to 15 to 20 billion euros – ZF did not mention exact figures here.

Israeli startup Ree puts the motor in the wheel