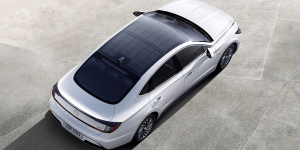 Hyundai has just presented the new edition of the Sonata Hybrid, which will have two new features in addition to optical upgrades: A solar roof will be installed for the first time and the new Sonata will make use of Active Shift Control transmission technology (ASC).

The hybrid sedan is powered by a 112 kW petrol engine and a 38 kW electric motor. The system output is 143 kW and consumption is 4.97 litres per 100 kilometres. This was the extent of technical details revealed thus far.

There are also not many technical details regarding the solar roof. Hyundai merely states that with a daily charging time of six hours, the charged energy is sufficient to gain an additional range of up to 1,300 kilometres per year. The solar roof should primarily charge the battery and at the same time avoid unnecessary battery discharges.

The Korean carmakers Kia and Hyundai had already announced the use of solar roofs in November last year. The two companies want to offer solar panels for selected vehicles in the future. Hyundai is developing three types of solar roof charging systems: The first-generation system for hybrid vehicles consists of a structure of silicon solar cells integrated into a standard car roof. This system can charge “30 to 60 per cent of the battery” on a normal day, depending on weather conditions and other environmental factors. The second-generation semi-transparent solar roof for combustion models can be integrated into a panoramic roof that lets light through to the cabin and simultaneously charges the vehicle battery. The third-generation system for purely battery-electric vehicles is currently in the test phase. It is intended for use on the hood and roof of battery electric vehicles of future generations.

The other technological innovation is the Active Shift Control transmission technology (ASC). ASC is designed to improve the shift time of a hybrid transmission by 30 per cent while reducing fuel consumption. By applying a new software logic, ASC technology uses the electric motor of the hybrid drive to optimise shift times during gear changes. By monitoring gear changes in real-time, the control unit ensures that the speed and efficiency of input and output shafts are synchronised. For example, if the speed of the input shaft is lower than that of the output shaft, ASC uses the electric motor to increase the speed. The control electronics check this process up to 500 times per second. This should enable shorter switching times compared to previous hybrid drives.

Active Shift Control celebrates its premiere in the new Hyundai Sonata, which Hyundai will not offer in Europe. However, models for the European and German markets will apparently follow.