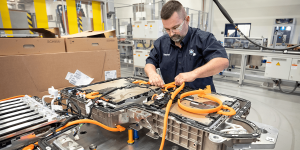 BMW has doubled battery production capacity at its Spartanburg plant in South Carolina for the upcoming plug-in hybrid models. The investment amounts to around ten million dollars.

The high-voltage batteries are to be used in the PHEV offshoots of the X3 and X5, which will also be built in Spartanburg. Production of the X5 xDrive45e is scheduled to start in a few weeks in August. By the end of the year, 120 employees will be working in battery production.

“We have invested around ten million US dollars in a new battery assembly line and expanded the area to more than 8,000 square metres,” says Michael Nikolaides, Head of Motors and Electric Drives.” This means we could double the number of batteries produced if needed to meet market demand.”

BMW assembles batteries for installation in their vehicles – the cells themselves will continue to be purchased. According to the carmaker, they will be assembling “fourth generation” batteries, which have a higher energy density. The battery cells will continue to come from Samsung SDI. Last year there were reports that the Korean battery cell manufacturer would supply BMW with 500,000 cells per month with a capacity of 34-ampere-hours (Ah). In PHEV, these cells will replace the previous 26 Ah cells of the previous generation. With 96 cells per vehicle, this would be enough for around 5,000 PHEVs per month.

With the X5 xDrive 45e, the new cells ensure that the part-time electric vehicle now covers around 80 kilometres electrically compared to 31 kilometres previously reached according to NEDC. In the predecessor of the X5, a four-cylinder petrol engine with 180 kW was used; in future, the German carmaker will rely on a three-litre six-cylinder engine with an output of 210 kW. In combination with the 82 kW electric engine, the vehicle will have a system output of 290 kW and a torque of 600 Nm.

The assembly line has also been expanded so that it can now produce different types of batteries – i.e. for different vehicle models. The second PHEV from Spartanburg, the BMW X3 xDrive30e, is expected to be available in December. The X5 xDrive40e of the predecessor generation was already manufactured at the US plant between 2015 and 2018.

Toyota and CATL enter a series of collaborations