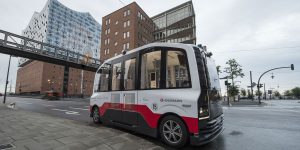 Trial operation though will start this August. In the first phase, the electric vehicle will be on the road without passengers on a specified route in test operation – in order to gather data and experience. The first passengers will not be taken along until mid-2020, still with a vehicle attendant. Autonomous Level 4 operation without a companion is to be achieved in October 2021.

Despite the precisely timed timetable, the project is slightly behind schedule. At the presentation in summer 2018, trial operation without passengers was already planned for spring.

The minibus was developed by IAV and is currently approved for ten passengers – on two benches with four seats each and a folding bench with two additional seats. It is also equipped with a ramp so that the bus is barrier-free. The batteries for the electric drive are to be recharged at Vattenfall in HafenCity. For autonomous driving, IAV not only relies on sensors in the vehicle, but the route has also been upgraded with additional infrastructure (such as sensor elements and digital communication systems).

Unlike the EasyMile EZ10 from Ligier, which is currently in trial operation in Wusterhausen in the Brandenburg district of Ostprignitz-Ruppin, the Hamburg vehicle will not be throttled down to 15 km/h. Since the HEAT vehicle is to be tested “under real conditions in public road space”, it can travel at speeds of up to 50 km/h.

For Hamburg’s Economics and Transport Senator Michael Westhagemann, the project is an opportunity to explore automated and networked driving on his own. The project runs under the motto of “Safety first!” says the politician, before adding that “human acceptance is an essential factor for the future use of autonomous vehicles.”

Siemens, the Institute for Climate Protection, Energy and Mobility (IKEM), the German Aerospace Center (DLR) and Hamburger Hochbahn are also involved in the project. The IKEM, for example, procures the requirements derived from the experiment for the vehicle, the infrastructure and the regular operation with passengers. The Hochbahn is responsible for integration into the local public transport network and wants to gather experience for new offers. “Especially at times of day or in areas where conventional public transport solutions today reach their economic limits and are therefore not attractive enough to motivate people to change from private cars, autonomous driving offers us a perspective,” says Hochbahn CEO Henrik Falk.