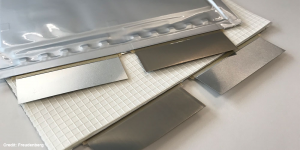 Battery expert Jeff Dahn of Dalhousie University has been Tesla’s research partner since 2016 and is now reporting on a new approach to higher energy density cells. These are lithium metal cells in pouch format with liquid electrolyte.

The approach: The team around Dahn has combined a new lithium metal anode with a liquid electrolyte. This promises a higher energy density than with conventional lithium-ion batteries.

According to Dahn, he is sceptical about the solid accumulator batteries, on which the industry has high hopes. According to Nature publication, it has not yet been possible to avoid metal deposits, so-called lithium dendrites, on the electrodes of solid batteries. It is also unclear whether solid cells can be produced in the existing production facilities for cells with liquid electrolyte – further use of these expensive facilities could be more economical than a new technology.

Recently, a research team involving Graz University of Technology has developed a new solid electrolyte with significantly improved properties. But did not mention lithium dendrites in their press communication.

According to Dahn, the novel liquid electrolyte cells would not have had any dendrites after 50 cycles in the laboratory. After 90 cycles, this cell still showed 80 per cent of its capacity in tests, which is the previous record for cells with zero lithium surplus. However, these are laboratory results at the cell level – not in a battery pack as used in a vehicle.

Nevertheless, the researchers are optimistic: “This report demonstrates that stable cycling of lithium-metal cells may be possible with practical liquid electrolytes, which we believe could shift the research focus in this field away from solid-state batteries.”

The research was supported by Tesla Canada R&D and the Natural Sciences and Engineering Research Council.