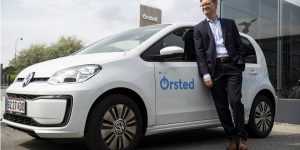 Danish utility Ørsted has announced that by 2025 it will have completely converted its current fleet of 340 vehicles to electric vehicles including plug-in hybrids. As early as 2021, the company will only purchase or lease electric vehicles.

“We’ve made great strides in switching power generation to green energy,” says Jakob Askou Bøss, Head of Strategy and Communication at Ørsted. “the next big challenge will be the transport sector, which at the moment is predominantly based on fossil fuels.”

The company says it has reduced its CO2 emissions from energy production by 83 per cent and sees itself well on the way to achieving its goal of reducing CO2 emissions by 98 per cent by 2025. The company’s announcement did not specify the existing figures used for the basis of this comparison.

Ørsted is the first Danish company to join the global EV100 initiative of the non-profit organisation The Climate Group. Currently, 22 per cent of Ørsted’s vehicle fleet is electrified. As part of the expansion of its electrified fleet, the company will also install or upgrade the charging infrastructure at its largest sites.