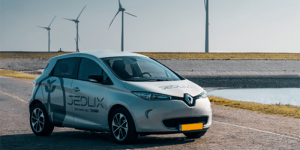 National grids must be able to balance electricity production and consumption and when this is disrupted, Transport System Operators (TSOs) are forced to activate secondary options to prevent imbalance, which often come from fossil-fuelled power plants.

To use Renault Zoe for network balancing, the car’s charging process had to be able to react to real-time signals. At Elaad’s test centre in Arnhem, in the Netherlands, the two partners conclusively proved that the Zoe is able to respond to TenneT signals within seconds. According to Jedlix, this kind of suitability is further proof that electric vehicle batteries can be efficient and competitive resources that contribute to increasing the flexibility requirements of national grids.

What the company has not mentioned in their press release, however, is whether the charging is bidirectional, i.e. whether electricity from the car’s battery can also be fed into the grid. Certainly, the Renault electric car does not come ex-works supporting bi-directional charging, only being designed to take up electricity. What is possible to help balance the grid, is that the charging power can be reduced if necessary – which can reduce peak loads and thus contribute to grid stability.

Two years ago, Jedlix and Elaad made the same tests with Tesla cars. “In a previous study with Jedlix, we also found a positive effect on the distribution network when we respond to transmission network signals, which is crucial for the long-term introduction of electric vehicles,” says Elaad Director Onoph Caron. “We invite all OEMs to implement similar programs here in the Netherlands.”

Since 2018, Jedlix and Dutch network operator Tennet has been offering the flexibility of charging networked vehicles as secondary control power. In the Netherlands, according to a Zoe drivers’ announcement, smart charging can be used via the “Renault ZE” app.

Renault already has two smart grid projects underway: on the French Island of Belle-Île-en-Mer where the system on the island will combine a car-sharing service with EVs, local solar energy storage and an intelligent charging system. Renault is converting used batteries to power the largest holiday resort on the island.

Similarly, on the Portuguese island of Porto Santo, several Renault Zoe is being used as part of a smart grid project to be part of an intelligent power grid. There, Zoe models are retrofitted prototypes that allow bidirectional charging.