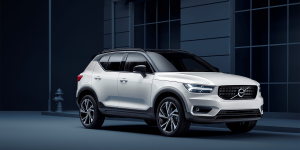 Volvo has released UK pricing and specifications for its new XC. Volvo retailers are taking customer orders now, with the first cars scheduled for UK delivery in February 2020.

The XC40 is the last model in Volvo’s line-up to be released as a semi-electric model. The plug-in hybrid SUV includes an 81bhp (60.4 kW) electric motor that manages an all-electric range of approx 46 km (28.6 miles). The PHEV is fitted with a 10.7 kWh battery, and the powertrain has been co-developed by Volvo’s parent company, Geely.

As with all plug-in hybrids, the emissions of the vehicle depend on the driver’s behaviour. The semi-electric SUV will be more economical for lower-mileage drivers, while drivers will have to use the petrol engine for longer motorway trips. In the UK, the semi-electric SUV falls into a low tax band.

The XC40 comes with a standard three-pin charging cable, and a fast-charging cable is available for another £50. With fast charging, the battery fills up in around 2.5 hours, while it takes six hours to charge the SUV at a regular household socket.

So far Volvo has managed to get at least semi-electric versions of all of its models out to market, of which the XC40 is the last. In the coming months, however, Volvo will be bringing out their first fully electric vehicle, which will be a battery-electric version of the XC40.

This article has been updated from a previous version that claimed a diesel engine. Volvo has indeed been moving away from all diesel motors since 2018 reportedly and intends to continue to do so. By 2025, Volvo aims to make up half of its world sales from purely electric vehicles. Electrifying the best-selling XC40 is, therefore, a logical step.