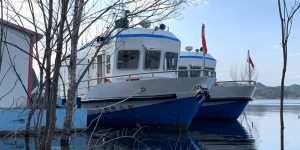 Danfoss Editron has just supplied the electrical propulsion systems for two workboats to be used on the Miyun Reservoir near Beijing. Both ships are purely electric, although one has a diesel generator for the emergency power supply onboard in addition to the Danfoss Editron electric drive.

Miyun Reservoir is the most important source of drinking water for the Chinese capital. The two workboats will carry out water quality checks and engineering work on the reservoir.

The Miyun Reservoir has a surface area of 180 square metres and is located eight miles northeast of Beijing and supplies clean water to the city’s 21.5 million inhabitants. For this reason, electric drives have obvious advantages. Both ships, developed by CSSC Guijiang Shipyard and CSIC Shanghai Marine Diesel Research Institute (CSIC 711 Institute), are equipped with Editron systems. The company says these systems are half the size of conventional diesel-electric propulsion systems.

Of the two ships, one is an all-electric 68-foot workboat that will be used for rescue operations, forest fire fighting and cleaning. The utility boat should be able to cover 124 miles and is equipped with an alternating current system. Danfoss has given the boat two drive motors with permanent magnet technology as well as inverters and active front-end drives.

The hybrid water quality monitoring vessel, on the other hand, is 78 feet long and will carry out daily and urgent water samples and sludge collection tests. The boat is usually powered purely by electricity and has a range of 31 miles. However, it is also equipped with a diesel generator as an emergency power supply. For this vessel, Danfoss Editron has supplied an advanced DC system consisting of two permanent magnet drive motors and converters with synchronous reluctance support.

Duan Zheng, CSIC Shanghai Marine Diesel Research Institute’s Chief Technical Officer commented: “We are expecting to see increasing demand for emission-free ships in China in the near future and we are delighted to have found a reliable partner in Danfoss Editron to deliver these with. We chose to work with them due to their advanced technology, their impressive European marine project portfolio while being able to work directly with their local technical team made the project delivery much easier than expected.”

The ships were commissioned by the Chinese government as part of a directive for inland waterway vessels to reduce their emissions.