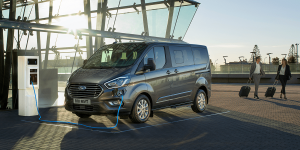 Ford has opened the order books in Europe for the plug-in hybrid variants of its Transit Custom and Tourneo Custom models. While transit is intended to score as a delivery van, the Tourneo, according to Ford, can be used as a business shuttle or family car.

Deliveries are scheduled to start this year. The Transit Custom Plug-in Hybrid will be offered in the UK at a basic list price of £ 39,145, while the Tourneo Custom Plug-in Hybrid will cost at least £40,734 (before VAT). The two models share the technology, i.e. both are driven exclusively by the front wheels with a 92.9 kW electric motor. Up to 56 electric kilometres should be possible with the built-in lithium-ion battery (also 13.6 kWh). As a range extender, the 1.0-litre petrol engine – depending on the selected driving mode – recharges the battery while driving. The chemical accumulator, for which Ford grants a guarantee of 8 years or 160,000 km, can, however, also be charged externally. The charging process takes about three hours while it takes 4.3 hours at a household socket.

The degree of energy recovery via recuperation and brake support is also variable on both models. There are also four driving programs to choose from, which determine how and when the available battery charge is used. In “EV Now” mode, for example, driving in electric mode is prioritised.

So much for the similarities. Otherwise, the Transit Custom PHEV, like its conventionally powered counterpart in the one-tonne class, is characterised by a load volume of 6 cubic metres. Ford puts the net payload at 1,100 kg. The part-time streamers are available either as panel vans or station wagons – each with a short L1 wheelbase (2,933 mm) and flat H1 roof. In addition to the Ford SYNC 3 entertainment and communication system, the vehicle also features the usual assistance systems and the FordPass Connect modem, that includes fleet management. Interesting for e-mobilists: The Transit Custom PHEV is to be equipped with a geofencing module from spring 2020, which will ensure that the van automatically switches to a purely electric drive in low emission zones and individually definable areas.

Customers can now order the plug-in hybrid, and Ford says it will be delivering its first vehicles this year. “The Transit Custom Plug-in Hybrid shines without compromise with its usual suitability for everyday use,” advertises Ian Porter, chief engineer of the Transit Custom programme at Ford Europe. He combines the advantages of the emission-free electric drive with the freedom to effortlessly drive longer distances.

To test the vehicles’ viability in urban environments, a one-year field trial was launched, during which customers with a fleet of 20 Transit Custom Plug-in Hybrid vehicles covered more than 250,000 kilometres under real everyday conditions in London. Ford recently published the results. As a core statement, the car manufacturer states that 75 per cent of the distances covered by the test vehicles in London and 49 per cent of the routes in the extended London area were covered purely electrically. Similar field tests are currently underway in Cologne and Valencia. In addition to the Transit Custom Plug-in Hybrid, the Tourneo Custom Plug-in Hybrid is also used there.

The Tourneo Custom with plug-in hybrid drive will also be available at the end of the year. There is nothing to add to the above technical data. According to Ford, the large-capacity limousine for up to eight passengers is suitable as a “family transporter” or “business shuttle for companies that frequently travel in environmental zones such as city centres”. The second and third rows of seats can be configured in such a way that passengers can also sit opposite each other if necessary.

Ford is also taking the opportunity to announce that it will be “working with six leading energy suppliers” in Europe in the future. The focus is on on-site charging options for Ford customers and “green” electricity tariffs. Just recently, Ford announced corresponding cooperation with the energy supplier Centrica, which includes electric vehicle services in Great Britain and Ireland. The carmaker will not reveal who the new partners are.

Finally, Ford is introducing a new app that makes it easier for drivers of its plug-in hybrid vehicles to find charging stations and pay for them. In partnership with NewMotion, this new app gives Ford customers easy access to more than 118,000 connection points in 30 countries, according to company headquarters.