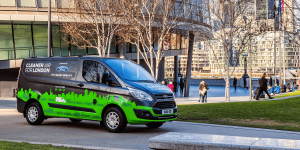 The U.S. carmaker has been running fleet tests with its Ford Transit Custom PHEV in the UK since last year and is now ready to undertake a similar effort in Spain. Here, Ford will team up with the city of Valencia in an effort to curb air pollution.

For Ford these fleet trials serve to see how much emissions their plug-in hybrid van can truly save. In London, their running first trial includes 20 Transit Custom PHEV being run by select fleet operators with Ford collecting data about the vans use, costs and environmental effects over 12 months.

In Spanish Valencia however, they will focus on small and medium Ford Transit Custom plug-in vans which shall run mainly electrically, that is within their range of 50 kilometres so that the onboard gasoline engine turns into no more than a range extender. Ford calls this their EcoBoost technology not unlike Nissan’s ePower that is used in their Note plug-in car.

Says Ford Europe President and CEO Steven Armstrong: “As no two cities are alike, it is vital that we look at the mobility issue from a variety of perspectives. Our research in Valencia will help us gain a meaningful understanding of the benefits that small and medium fleets running primarily on electric power can bring.”

The forthcoming Ford Transit Custom PHEV is part of an electrification strategy that will see the automaker spending 11 billion dollars to introduce 40 new electrified vehicles by 2022, including 16 pure battery-electric vehicles reportedly.

Moreover, Ford had recently increased their efforts in China and agreed to look into electric car sharing together with its local partner Zoyte there.

In Europe, Ford has also expanded its cooperation with Deutsche Post/DHL and their StreetScooter vans Work and Work L. The electric vans are now available at Ford dealerships for third parties to buy (we reported).