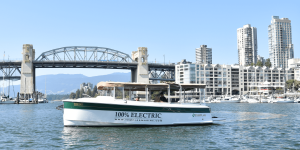 Torqeedo has developed a fully electric propulsion system for the Canadian boatbuilder Templar Marine. The Torqeedo drive for the new Templar C26 Cruiser consists of a Cruise 10.0 motor driven by six lithium-ion batteries.

The base model’s battery configuration delivers up to seven hours of power at a cruising speed of five knots with the option of adding up to ten batteries for more extended range. The batteries can be recharged at the dock with a standard 15 or 30 amp shore power plug. Alternatively, an optional solar roof can support the charging process.

The 26-foot semi-displacement hull of the electric day cruiser has a width of 9.6 feet and can accommodate up to 15 guests on deck. Below deck, there is an entirely separate front cabin with a standing height of six feet, with sleeping berths in the bow, a private bathroom with washbasin, as well as a refrigerator, central heating, a stereo system with Bluetooth and numerous USB connections. The boat also has a bow thruster for manoeuvring and docking, a bathing platform and a ladder for easy access to the stern.

Templar also offers a water taxi version certified by the Canadian government for commercial use with up to 12 passengers. Gray Line’s Hop-on Hop-off Sightseeing Tour in Victoria, Canada, recently ordered 12 boats for use in the port excursion business and as quiet, environmentally friendly cruisers for dinner cruises. Next on the agenda is a Sedan version for long-haul cruises and a commercial light cargo vessel. All will be built in the same 26-foot hull shape.

The Canadian company has made it its mission to reinvent the entire concept of electric boating. Mark and Jennifer Fry, the founders of Templar Marine, were looking for an environmentally friendly year-round day cruiser with all the amenities of modern motorboats. The founders were not satisfied with existing electric day cruisers, so they started to design their own model. The result is the new Templar C26 Cruiser made of fibreglass with a fully electric propulsion system from Torqeedo.