In the two most important markets for e-mobility, new car sales have been slowing, as CAM has stated in its latest issue of the ‘Electromobility Report 2019’. Meanwhile, the Netherlands is turning into the fastest growing PEV economy.

For the study, the team from the Center of Automotive Management (CAM) headed by Stefan Bratzel compiled the new registration figures for the most critical car markets for electric cars and plug-in hybrids in the first three quarters of 2019. The survey covers China, the USA, Norway, Germany, Great Britain, France and the Netherlands.

Although China remains the undisputed number one among the electric car markets, the lead market lost much momentum in the third quarter, as CAM states in its announcement. Between the beginning of July and the end of September, 243,000 electric vehicles (including battery-electric cars and plug-in hybrids) were newly registered in China, which represents a 21 per cent drop compared to Q3 2018. 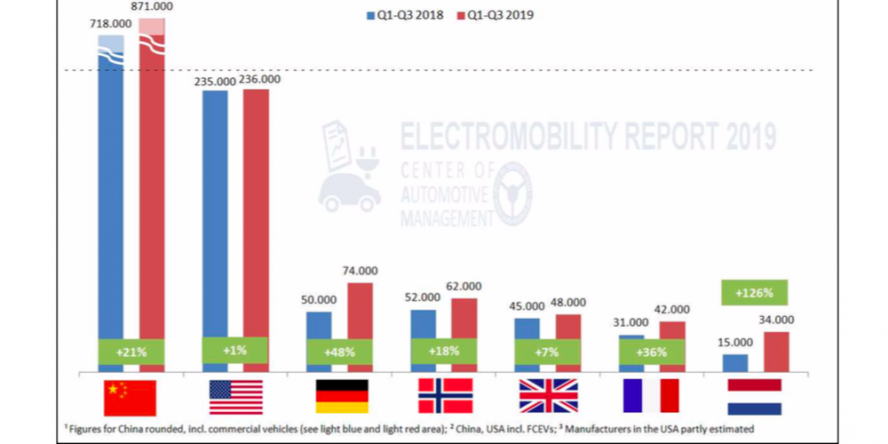 “On the one hand, the sharp decline is due to the reduction in incentives to buy electric cars, and on the other to the economic downturn in the wake of the trade disputes with the USA,” the study says. Thanks to the high gains from the first two quarters, however, electric car sales have increased by 21 per cent to 871,000 units since the beginning of 2019. But: after the second quarter, the increase was still 52 per cent compared to 2018. At the end of September, the market share for BEV and PHEV was 4.7 per cent, after having exceeded the five per cent hurdle in the meantime.

Growth has also slowed considerably in the USA: at the end of the first six months there was still a 20 per cent increase in new registrations compared with the same period last year; after the third quarter there is only a meagre increase of 0.5 per cent left – by 2018 there were 235,000 units by the end of September, and now the CAM has 236,000 units.

Researchers in the USA have found a definite shift in the ratio between all-electric cars and plug-in hybrids. While the BEV increased by 16 per cent, 27 per cent fewer PHEVs were approved compared to the same period last year. Tesla continues to be the market leader, responsible for around 59 per cent of e-car sales in the USA in the third quarter alone with about 52,000 new passenger car registrations.

The situation is different in Europe, where the study continues to show high growth rates. After Germany overtook Norway in the evaluation of the new registrations of BEV and PHEV in the second quarter, the lead grew significantly in the third quarter – the statistics show 74,000 units in Germany (+48 per cent) and 62,000 units in Norway (+18 per cent).

A comparison of the absolute figures is, of course, not possible given the different sizes of the vehicle markets. With a 55.6 per cent share of the electric vehicle market, Norway continues to be the world’s lonely leader – even though its market share has fallen slightly compared to the Q2 evaluation. In Germany, the market share rose from 2.6 to 2.7 per cent. 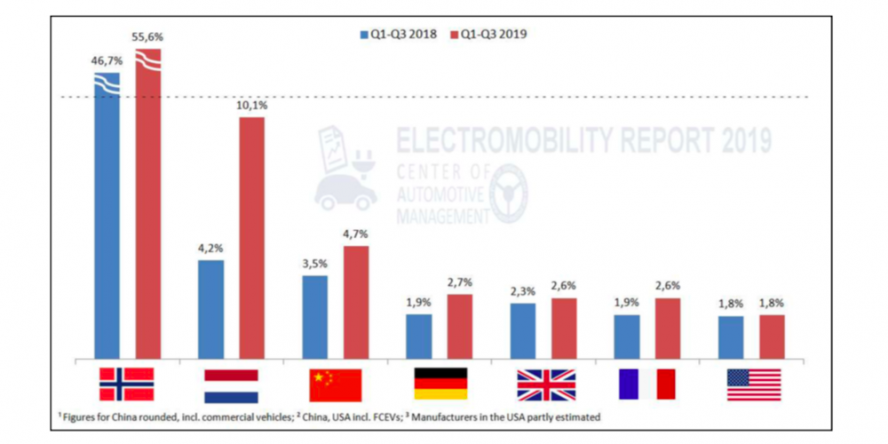 Probably the most positive development in market shares was observed in the Netherlands. In the third quarter, the Dutch passed the ten per cent mark for the first time. In the current year, 34,000 units were registered in the Netherlands, which represents an increase of 126 per cent compared with the 15,000 vehicles from 2018 – even though the overall market shrank by 7.6 per cent in the same period. This makes the Netherlands the fastest growing electric car market in the world, followed by Germany with the 48 per cent mentioned above.

However, there is less good news for Germany with regard to CO2 emissions: although the weighting in Germany is shifting from PHEV (stagnating) to BEV (sales doubled), according to the CAM, the average CO2 emissions of newly registered vehicles in 2019, at 157.5 g/km (YTD), are still as high as six months earlier. By way of comparison: Norway has fleet CO2 emissions of 59 grams and thus already meets the EU targets for 2030.

A look at the vehicle models shows that the purchasing behaviour of German EV drivers differs from that of other European markets. In the Netherlands, the Tesla Model 3 accounts for around 42 per cent of new electric car registrations, and the arrival of the right-hand-drive models in the UK in the third quarter has also provided a high level of momentum. In Germany, new listings spread across several models, with the Renault Zoe (7,872), the Tesla Model 3 (7,678) and the BMW i3 (7,089) among the top performers.

How the market develops with the premieres of the revised Zoe with a larger battery and CCS connection, the VW ID.3 (and the significant discounts on the e-Golf in the run-up to the launch), the Opel Corsa-e and the numerous plug-in hybrids presented at the IAA will be exciting to watch in 2020.

“E-mobility is on the verge of a broad market breakthrough in 2020 and 2021 given new models from major automobile manufacturers that are ready for series production and the regulatory pressure in various countries,” says Stefan Bratzel, head of the study. “However, an economic downturn in the global economy could have a braking effect in various regions. At the same time, the increasing competition will also lead to consolidation in the automotive industry, especially in China”.