With the launch of the Golf 8, Volkswagen is sending its bestseller onto the road in five hybrid variants, without a single purely electric drive among them. Christoph M. Schwarzer has taken a detailed look at them all and asks if the Golf 8 will be the last of its kind.

The mood is good. Volkswagen has turned the premiere of the Golf 8 into a home game: In the “Hafen 1” event hall at Volkswagen’s Autostadt, the Germans from Wolfsburg are revealing what is presumed will be a new EU top seller. The result is a car that looks like a facelift of its predecessor and yet it is also visually close to the recently revealed Volkswagen ID.3. The glaring difference is that every Golf 8 has a combustion engine. A wide-ranging collection of two plug-in hybrids with charging plugs, three mild hybrids with 48-volt systems, two diesel engines and a natural gas drive. The e-Golf, on the other hand, no longer exists.

Volkswagen is thus making a clear distinction between the Modular Transverse Module (MQB) in the Golf and the Modular Electrification Module (MEB) in ID.3. Not only that, but the nomenclature is also changing: the plug-in hybrids are now called eHybrids. The two available versions basically have the same drive train and the externally rechargeable battery has a capacity of 13 kilowatt hours (kWh). When their electrical energy is exhausted, an internal combustion engine with direct injection, turbocharger (TSI) and 1.4-litre displacement starts up. The system is designed as a parallel hybrid, so the electric motor sits between four cylinders on one side and a 6-speed dual-clutch gearbox (DSG) on the other. The combined output is 150 and 180 kilowatts (kW) respectively, with the stronger version again bearing the GTE label.

The two eHybrids are important because the Golf is not only the best-selling car in the European Union as a whole but also in terms of new commercial registrations in Germany. Here in Germany, the so-called 0.5 per cent rule applies: the monetary advantage in the private use of a company car is that it only has to be taxed at 0.5 per cent instead of one per cent of the gross list price per month.

All eHybrids fall under the 0.5% rule.

Since the introduction of the new measurement cycle WLTP (for Worldwide Harmonized Light Vehicles Test Procedure) on September 1, 2018, CO2 emissions have been individualised for each type of equipment in addition to the engine/transmission combination. Each click in the configurator changes the CO2 value. With the Golf eHybrid, it can be assumed that even the version with all the checkmarks on the options list meets the requirements of the German Electromobility Act (EMoG), subsequently receives an e-label and therefore falls under the 0.5 per cent rule. This is the case with the Passat GTE, so it will be the same for the shorter and lighter Golf. With a view to other European markets such as Sweden, the eHybrid is also likely to significantly increase its share in the engine mix, as plug-in hybrids are often promoted.

There is little danger of delivery problems: Volkswagen AG is standardising this powertrain and using it in more and more car types. The Passat has it, the Golf has got it, the Seat Tarraco and various other SUVs have it too. The 13 kWh battery from the Braunschweig-based system production plant is built in large numbers, which is said to be possible without any problems.

A disappointment from the customer’s point of view are the three mild hybrids, which are given the abbreviation eTSI. Anyone who expected to find a direct competitor to the Toyota Corolla Hybrid Synergy Drive in the Golf 8 will be disappointed: the eTSI can never drive electrically. Although acceleration without a combustion engine is only a side effect of Toyota’s design for maximum economy and not the original goal, many buyers still value the quiet glide.

The Golf 8 eTSI is available with 81, 96 and 110 kW engine power. The least powerful version is based on the proven three-cylinder engine with one-litre displacement. The two more powerful ones have the 1.5-litre four-cylinder under the hood. All have the 7-speed DSG in common. Theoretically, it would be possible to couple the 48-volt hybrid system to a manual gearbox with an e-clutch. Volkswagen, however, is banking on comfort.

The basic principle of all hybrid passenger cars also applies to the Golf 8 eTSI: when trailing the throttle and braking, a belt starter generator recovers electrical energy (recuperation) and stores it in a lithium-ion battery with an estimated capacity of around one-kilowatt-hour. When starting or accelerating, this buffered force is transmitted directly to the crankshaft via a belt. In addition, the eTSI with 81 and 96 kW have the Miller combustion process with higher thermal efficiency. And the drag coefficient has also been reduced to cW 0.275 with a frontal area of 2.21 square metres.

In recent years, electrive has had several opportunities to test various prototypes with mild hybrid drives at the test site in Ehra-Lessien here in Germany. What they all have in common is significantly improved restart performance and spontaneous propulsion at low speeds. The extent to which this design reduces fuel consumption and thus CO2 emissions, in reality, will only become apparent in practice. Unfortunately, it cannot be assumed from the paper form that the Toyota Hybrid benchmark will be reached or even undercut. For the time being, Volkswagen is only providing general information on the reduction of CO2 emissions in the Golf 8: A drop of ten per cent is reported for the eTSI and 17 per cent for the TDI. Exact values follow the general type test (homologation).

At the presentation of the Golf 8, the supposedly good old combustion engine world is therefore in order. Here we are not talking about details of cell chemistry, economies of scale in battery production or charging performance. This is about the car with which Volkswagen says it must earn the money in the 2020s to invest in the energy revolution.

However, if you get rid of the rigid view of the powertrain, the convergence between MQB and MEB is obvious. For example, the Golf 8 is “always on” with an eSIM, has a digital cockpit even in the basic version and is fully Car2X-capable via the WLANp / ITS G5 standard as standard. This feature could become the most important progress of this Golf generation because with Car2X the number of accidents will decrease and driving automation will be improved. 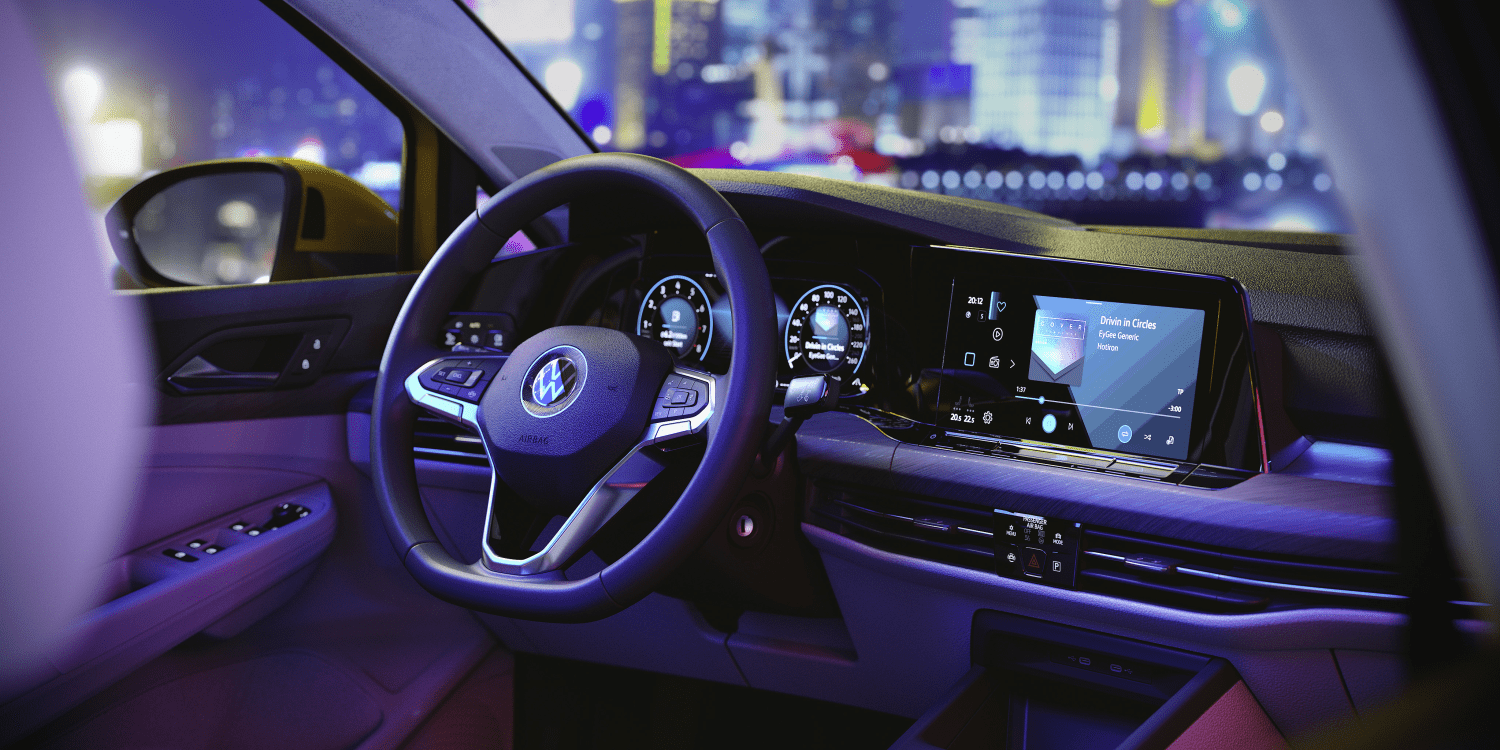 An example of this is the Traffic End Assistant, which intervenes when another Car2X-enabled car starts an emergency braking manoeuvre up to 800 metres ahead. And there is another element that makes it clear how electric mobility affects the Golf 8: there are updates via software and WLAN as well as upgrades. The automatic distance control ACC, the high beam assistant, navigation, smartphone integration and online voice control can all be activated at a later date.

Competition and synergy between MQB and MEB

From an industrial perspective, the blurring of MQB and MEB is only logical. From steering to air conditioning to connectivity, it makes perfect sense to use common parts to reduce costs. If this is the case, the long-term question is whether and when the Golf is superfluous as a series because the combustion engine has survived.

The Golf 8 can be ordered from the end of the year and will be delivered in 2020. It will have to survive until around 2028. During this period, it is crucial how customers react: Do they still want the safety that the Golf gives them, or are they going to get involved in what is apparently the ID.3 experiment or its derivatives from Seat and Audi?

On a sober note, ID.3 will not kill the Golf. The Zwickau plant is designed for 330,000 units per year – not only for the ID.3, but also for other models based on the MEB. This is a lot compared to other brands and models. In the Volkswagen Group with its more than ten million passenger cars per year, however, this only makes up three per cent of the total number. A niche. For the time being.

In a radical success scenario for the ID.3, the costs for the battery would have to fall extremely quickly, international production capacities would have to increase rapidly and at the same time a leap in technology would have to take place, as is conceivable, for example, with solid electrolyte cells. Although this is possible in principle, it is still highly unlikely in the usual run-up to industrial processes. The idea that the Golf 8 is the last Golf is therefore based more on euphoric hopes for electromobility than on foreseeable facts. The Golf 8 will be a success and not the last Golf. But perhaps the penultimate.