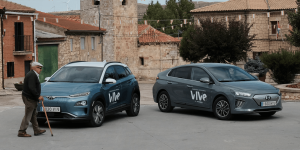 Campisábalos is located about two hours by car north of Madrid in the Sierra de Pela at an altitude of 1,351 meters. According to the World Health Organization (WHO), the village with just 52 inhabitants already has the cleanest air in Spain. With electric car sharing, Hyundai says it wants to help keep it that way.

The electric car sharing service VIVe is free of charge for registered residents of Campisábalos. “[This] is an efficient solution for rural mobility and for which we have relied on the functionality offered by electric technology,” says Leopoldo Satrustegui, general director of Hyundai Motor Spain, according to a statement. They also want to refute the prejudice that electric mobility and innovation are not compatible with the rural world.

“We have good air quality precisely because there is nothing around us,” says Mayor Pedro José María de Pablo. But there are other problems, such as connecting the small village with its narrow streets and stone houses. “With this electric car, we can move more easily to nearby towns, where we have to go for basic services for our residents such as the pharmacy, the outpatients’ clinic or just to buy bread.”

Also some of the inhabitants of Campisábalos do not feel lost anymore. “Living in such a small town, the cost of transport is quite high, and also having your own car forces you to spend more than 30 euros on fuel just to go to Guadalajara,” said Álvaro Chicharro. “Now we can make use of this car with zero environmental impact, similar to other options that already exist in Madrid or other major cities.”

Residents with a driving license can book and unlock their cars via an app. The vehicle can be reserved for a maximum of 24 hours, and only journeys within a radius of 170 kilometres are allowed. The Kona Electric (64 kWh version by the way) and Ioniq Electric are charged at one of two charging points that Hyundai has set up for electric car-sharing in the village.