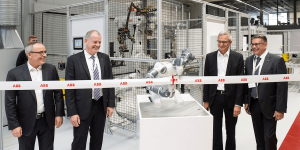 ABB has inaugurated a production facility for energy storage systems used in railways, electric buses and electric trucks in the Swiss city of Baden. The new plant will assemble standardised battery modules from battery cells.

The newly inaugurated facility in Baden, enables ABB to supply the entire power train including energy storage solutions “from a single source,” explains Robert Itschner, CEO of ABB Switzerland and Local Business Manager of the Motion business. The decision for Baden as the production location fell due to its proximity to the ABB Center of Excellence for Traction Converters in Turgi and the company’s Corporate Research Center in Dättwil.

The plant will supply clients from various countries. Among the first are local users deploying trolleybuses destined to hit the road in the Swiss cities of Zurich, Lausanne and Fribourg. ABB considers this an essential use case for this technology as the energy storage systems increase the flexibility of trolleybuses without the need for overhead lines spanning the entire routes.

For manufacturing in Baden, ABB assembles battery cells into standardised battery modules, that they then combine into energy storage systems configured to the specific application. Two robots do most work: One places the battery cells in the module housing, and the other joins them through laser welding. ABB has not disclosed any data on production capacity.

All products utilise lithium-ion technology with a view to “high energy and power density as well as their long service life even under high loads,” ABB adds in its communication. The transport business also builds on ABB’s experience in energy storage systems for applications such as in power grids or solar systems.