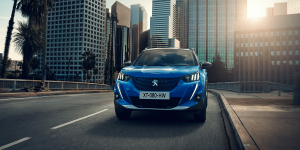 Peugeot has opened reservations for the new 2008 range in Britain. This includes the all-electric e-2008 that follows the bestselling e-208. In the UK, the compact e-SUV is to go from £32,000, after the plug-in car grant.

The French PSA brand is well on schedule with this latest on-sale for the Peugeot e-2008. This compact electric SUV follows the earlier opening of the pre-order books for the e-208. The latter is outselling expectations to the extent of Peugeot thinking aloud about increasing the EV share in its production plans.

Just like Peugeot’s e-208 compact car, the electric SUV model e-2008 sits on the e-CMP platform PSA has jointly developed with Dongfeng. In fact, the technical data is analogous to that of the e-208 in that both have an electric motor with 100 kW and a 50 kWh battery. Due to the slightly higher weight and drag of the SUV, the WLTP range of up to 310 kilometres in the e-2008 is slightly shorter than that of the e-208 (330 kilometres or 193 miles). The battery warranty is eight years or 160,000 kilometres, based on 70 per cent of the charging capacity. The electric car is capable of 100kW fast-charging, which will recharge the battery to 80 percent in just 30 minutes, while topping it up on a conventional 7.4kW charger will take 7.5 hours.

Reservations for the e-2008 SUV are now open in the UK and customers in Britain may reserve the e-2008 SUV in GT Line trim. Later versions will include the Active, Allure and GT trim levels.

For deliveries, David Peel, Managing Director of Peugeot UK said “we are excited to start deliveries early next year.”

The price of £32,000 includes PCG. Fleet and company car drivers additionally benefit from low company car tax rates as the e-2008 SUV will be exempt from paying Benefit-in-Kind (BIK) tax from April 2020 onwards in the UK.