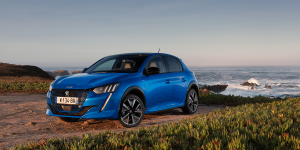 According to brand manager Jean-Philippe Imparato, the electric version accounts for around a quarter of advance orders for the new Peugeot 208. Peugeot had only reckoned with 10%, but say they may double the e-208 production if demand stays this strong.

Imparato told Automotive News Europe that it was still too early to say whether the volume for the electric vehicle version would be much higher than initially planned or whether the higher share could only be attributed to early adopters. In the best-case scenario of continuing high demand, Peugeot could increase the production of the e-208 to as much as 20 per cent of the 300,000 units per year planned for the series, according to the brand boss.

The new 208 was officially launched at the end of February. The Group presented details of the fully electric version at the Geneva Motor Show in March. In April, Peugeot opened the pre-order books for the all-electric version 208 series in the UK. In Germany, the pre-orders became possible in June just passed. Deliveries are scheduled to start at the end of the year.

The small car’s electric version will have an output of 100 kW and will offer a WLTP range of 340 km thanks to a 50 kWh battery. The other performance data and optical features of the e-208 in short: in sports mode, the model travels from 0 to 100 km/h in 8.1 seconds. The charging power is 11 kW (AC) or 80 kW (DC). Visually, the small car is similar to the Peugeot 508, not least because the 208 is seven centimetres longer and four centimetres lower than its predecessor.

Peugeot also announced just yesterday that three more of its e-branches – all plug-in hybrids – can now be ordered in Germany. The trio consists of the 3008 GT Hybrid4, the 508 Hybrid and the 508 SW Hybrid. The first one costs from 50,800 euros, the other two part-time electric cars are available from 44,000 and 45,100 euros respectively.