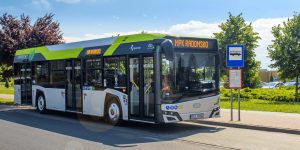 Solaris was selected in a tender to supply eleven hybrid buses to the Romanian city of Satu Mare. The Solaris Urbino 12 hybrid will be delivered in the second half of 2020.

The 12-meter-long Solaris buses can transport a total of 96 passengers, with a seating capacity of 31. In the Urbino 12 hybrid, the combustion engine delivers 151 kW and the electric motor 120 kW. Supercapacitors are also used as energy storage devices, which can store electricity very efficiently for a short period of time – for example, if the recuperation energy gained during braking is to be released directly the next time the vehicle starts. Here, the supercaps are more efficient than battery storage.

The buses will also be equipped with the Stop&Go system, which controls the operation of the diesel engine: It switches it off completely at bus stops and then switches it on again immediately after the vehicle has started. According to Solaris, this should significantly reduce fuel consumption and pollutant emissions.

At the same time as the hybrid buses were ordered, a framework agreement was signed under which the cooperation can be extended to include a further four Urbino 12 hybrid and two Solaris Urbino 18 hybrid articulated buses. The Polish company did not disclose any further details.