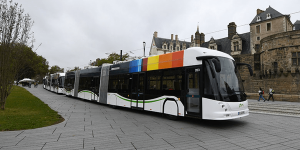 The Nantes Métropole association of municipalities is starting to integrate electric buses into its TAN network. By November, all 22 electric buses on line 4 will be in operation. The 24-metre-long articulated buses in tram design come from the Swiss manufacturer Hess.

Nantes Métropole is a French association comprising 24 municipalities – with the city of Nantes with 300,000 inhabitants as its centre and administrative centre. In 2016, the urban agglomeration invited tenders for the electric buses and subsequently awarded the contract to Hess, with ABB contributing its flash charging technology for fast intermediate charges.

In the meantime, Nantes Métropole has released a budget of 54.5 million euros for the acquisition of the 22 electric double-articulated buses. The city will gradually deploy the fleet on Line 4, which covers seven kilometres of the city centre of Nantes with suburbs south of the Loire. Almost 10 million passengers used the route in 2018. The network in and around Nantes is operated by Société d’Economie Mixte des Transports de l’Agglomération Nantaise or Semitan for short.

Each of the new electric buses can carry 150 passengers, 40 more than the 18-metre buses previously used. As an eye-catcher, the exterior of the new buses will be designed by artists from Nantes, Switzerland and abroad. The local authority association uses opportunity charging, meaning the coaches repeatedly charge during operation to minimise the weight and size of the batteries.

During operation, a flash charging system will be used that is part of a solution jointly created by ABB and Hess called TOSA (Trolleybus Optimisation Système Alimentation). This system has already been tested in Geneva from 2017. A telescopic arm automatically connects the charging system with the batteries of the electric buses mounted on the roofs. In addition to the two end stops, two intermediate stations are also equipped with the charging system. While the passengers get on and off, the 600 kW buses can charge within 20 seconds. At the terminal stations, the maximum charging time is five minutes.

Proterra to provide Florida with 33 e-buses