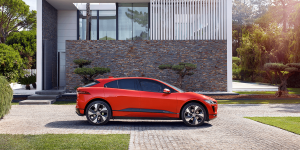 Jaguar has announced a software update in an email to I-Pace customers, which is intended to increase coverage by up to eight per cent. However, customers will have to drive to the workshop again for the update – but the new software will also make over-the-air updates possible.

According to the mail (which was forwarded by a customer), the British carmaker has announced a “Range Enhancement Program” for the I-Pace. “These software enhancements are provided free of charge and offer a range improvement of up to 8 per cent,” writes Jaguar.

The press office of Jaguar Land Rover Germany has not yet responded to a request from the editorial staff for the announced update, but we will update the article as the situation unfolds. Whether the update will also be available for German customers and what the schedule in Germany looks like is therefore not clear.

The 294 kW strong electric SUV has a WLTP range of 470 kilometres so far, in the more realistic EPA test from the USA it is the equivalent of 376 kilometres. With the update, 507 WLTP kilometers are possible, according to the EPA standard it is 405 kilometers. Unlike Audi, who also had to change the hardware for the latest e-tron update to increase the range by around 25 kilometers, the I-Pace is a pure software update.

According to the Jaguar mail, there are several individual measures. In Eco mode, for example, the torque distribution of the four-wheel drive is to become more efficient, and the active radiator blades are to be closed more frequently for better aerodynamics. In addition, the developers have released slightly more battery capacity and the battery can now be operated at a lower state of charge than before – but no figures are given. So far, the net capacity has been 84.7 kWh, the gross value remains 90.2 kWh.

It seems as if the developers have become a little more courageous with the experience they have gained in the meantime and can make better use of the reserves in heat management and the battery. Since 2018, the Jaguar I-Pace E-Trophy has been part of the supporting programme at some Formula E races. There, the converted I-Pace are moved in extreme driving situations. With the experience from racing, the brake system could also be recalibrated with the recuperation. When the battery is highly charged, energy recovery has so far been reduced to a greater extent and more energy is now to be recovered even at low speeds.

Another interesting point to note from Jaguar’s mails: This update has to be manually installed at the dealer. But it also includes features that will enable future over-the-air updates. Then the customer will no longer have to drive to the garage for further updates. The schedule is is set for “this month”.

Jaguar had increased the DC charging capacity of the I-Pace with a software update in March this year – from 80 to 100 kW.