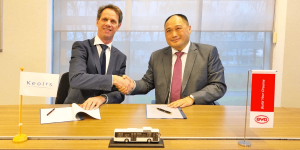 In concrete terms, Keolis will receive three different vehicle types: 8.7-metre-long midibuses and twelve-metre-long buses, as well as the newly launched 13-metre-long models with a longer range. The bulk of the order, namely 206 units, is for the 12-metre model, which the Chinese company describes as being their bestseller and for which they supply pantograph chargers to Keolis.

The background to this major procurement campaign is a new concession (“concession IJssel-Vecht”), which Keolis has been granted in the Netherlands and which will involve the country’s largest fleet of electric buses to date. The talk was of 300 electric buses. The 900 million euro concession for the Dutch provinces of Overijssel, Gelderland, Flevoland and the municipalities of Zwolle, Apeldoorn and Lelystad is valid for ten years from 13 December 2020. In addition to operation, it also includes maintenance of the electric buses and the charging infrastructure.

In line with this, BYD speaks of a “sophisticated overall package” and a “complete transport solution” developed for Keolis. BYD European Head Isbrand Ho stresses that it is the largest fleet in Europe “ever electrified”. Delivery programmes of this magnitude could only be achieved through excellent cooperation and the development of a long-term partnership.

The partners signed the supply contract a few days ago at Keolis’ headquarters in Deventer, the Netherlands. Frank Janssen, CEO of Keolis Nederland, describes the agreement as a milestone. They chose BYD because they have positive prior experience with their electric buses. “These are an essential part of our daily operations to the full satisfaction of our passengers and employees. In addition, we rely on BYD’s expertise as a manufacturer of battery packs for development and maintenance.”

According to BYD, its electric buses are now present in almost 60 cities and more than ten European countries. The European fleet currently totals around 1,200 electric buses. Outside Europe, the Chinese company booked another major order in mid-November: The manufacturer has been awarded the contract to deliver 379 electric buses to the Colombian capital Bogotá.