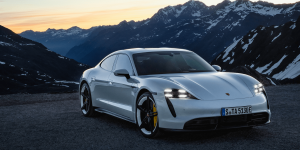 The US American Environmental Protection Agency has released their officially calculated range for Porsche’s Taycan Turbo BEV. The electric car only managed 201 miles – quite a bit lower than the anticipated 280 miles by WLTP standards.

This should not come as a significant surprise, as the EPA standard is a bit stricter than what WLTP allows for. However, it does make for a more challenging marketing stat. To compare, the Tesla Model S has a battery pack only slightly larger (100 kWh vs 93.4 kWh) but manages to drive far more efficiently, consuming 32 kWh for a 100-mile trip, while Porsche’s Taycan Turbo requires 49 kWh for the same trip, according to the EPA figures.

Porsche did announce plans for a third version of the vehicle with the Taycan 4s next year. The new entry-level model is available with two battery sizes, enabling ranges of up to 407 and 463 kilometres respectively (WLTP). The Taycan 4S with the smaller battery delivers up to 390 kW and up to 420 kW with the larger battery. The latter corresponds to the well-known battery from the Taycan Turbo and Turbo S with 93.4 kWh gross capacity (83.7 kWh net) introduced in September. The smaller battery dispenses with the modules of the larger version that are partially arranged one above the other and is therefore flatter. Porsche states the gross capacity in the announcement as 79.2 kWh, a net capacity is not mentioned – the surcharge for the ‘Performance Battery Plus’ is 6,521.20 euros.

However, they will have some serious catching up to do if they want to keep up with their Tesla’s performance at that price. However, it remains to be clarified which vehicle setup the EPA used, as this may affect vehicle and battery performance.

We will update the story as needed.