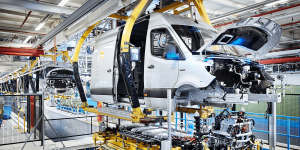 Series production of the eSprinter has started at the Mercedes-Benz plant in Düsseldorf. The electric version is manufactured on the same production line as the combustion engine versions of the bestselling van.

In the run-up to the production of the new Sprinter and the new drive variants, Mercedes-Benz Vans has invested a total of around 330 million euros in the technical expansion of production in recent years. They also designed the production facilities so that both conventionally powered and fully electric vehicles can be manufactured on a common production line.

Since the decision to build the eSprinter in Düsseldorf, the plant has “continually developed to become […] the leading Sprinter plant worldwide and to serve as a benchmark for the other locations,” according to the Group’s communication. To date, more than 2,400 employees have already been trained in the handling and assembly of high-voltage technologies.

Already during the conversion work for the start of production of the current version of the conventional Sprinter, Mercedes faced the challenge that the plant area could not be expanded even due to the location close to the city centre. The plant has been producing transporters since 1962, more than 4.6 million vehicles in total. More than 200,000 of the current generation alone have already been built in Düsseldorf. The transporter and station wagon versions of the Sprinter are manufactured there, while the models with flatbeds or cabs as the basic vehicle for special bodies are assembled in Ludwigsfelde near Berlin.


“In the coming years, electric drives will come to prevail more and more and become a mighty pillar in our product portfolio, which above all will govern the urban, commercial sector,” says Marcus Breitschwerdt, Head of Mercedes-Benz Vans. “Of crucial importance in this regard is that we remain flexible in production, as customer requirements and market requirements continue to change.”

Thomas Geisel, Mayor of Düsseldorf, hopes that the production of the eSprinter will give a boost to the traffic turnaround, next to the positive impact the production has had on the workforce “The Mercedes-Benz plant in Dusseldorf is one of the most important employers in our region and, for years, has been a guarantee for the attractiveness of our city.”

In Düsseldorf, not only the built vehicle but also the production itself is to become more sustainable. In the announcement, Mercedes-Benz Vans announces that it will make its entire van production CO2-neutral by 2022. As of this year, the electricity will only come from regenerative sources, and driverless transport systems and industrial trucks with fuel cell drive will be increasingly used.

The eSprinter itself will initially be offered as a box van with a high roof and can load up to 10.5 cubic metres, just like the internal combustion engine Sprinter. The maximum payload is 891 kilograms. The electric drive has an output of 85 kW, the range with the 55 kWh battery should be 168 kilometres. In a second battery version, which has a capacity of 35 kWh and a range of around 115 kilometres, the payload increases to about 1,040 kilograms due to the lighter battery.