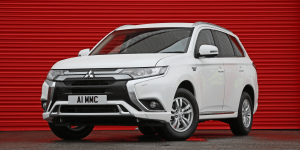 Mitsubishi intends to equip its Okazaki plant with a photovoltaic system and a storage system with used batteries from the Outlander PHEV. The storage system should have a maximum capacity of 1 MWh.

The Second Life use of the batteries closes the circle because the Outlander PHEV is built in the Okazaki plant – the older batteries now contribute to the fact that new plug-in hybrids can be produced. The photovoltaic system currently under construction on the factory roof can generate up to 3 GWh of electricity per year. The battery storage system is to be installed in the fiscal year 2020.

According to Mitsubishi, the combination of the solar system with the power storage system will save around 1,600 tonnes of CO2 per year. The storage tank is primarily intended to help avoid or absorb peak loads and consumption. The stored energy can also be used in the event of a power failure. However, Mitsubishi did not specify how long power failure can be bridged with the system. The gymnasium on the plant premises is an official emergency shelter for residents of the city. This also improves the district’s ability to react to catastrophes, such as earthquakes.

With the increasing spread of electric vehicles and plug-in hybrids, the number of spent batteries that can be used in Second Life projects is also increasing. Only last week Volvo Buses announced a second project in Gothenburg. Similar projects are also happening on a larger scale with Audi (1.9 MWh in Berlin) and Daimler (together with BIAC in Beijing and via Mercedes-Benz in Germany). Renault-Nissan is also testing the use of used batteries in various projects – recently in a Swiss fast-charging park.