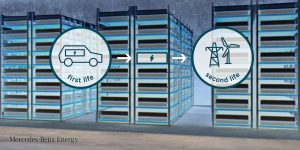 Mercedes-Benz Energy and BJEV intend to use BJEV’s old electric vehicle batteries for this purpose. In their announcement, Mercedes-Benz said that their engineers will use tests and simulations to demonstrate the potential for used electric vehicle batteries for evening out fluctuation in Chinese grid systems, as well as supporting power-failure management. In their announcement, Daimler did not provide further details on the planned storage facility itself.

The Daimler subsidiary sees “far-reaching opportunities” for stationary energy storage systems in the expansion of renewable energy generation. Gordon Gassmann, CEO of Mercedes-Benz Energy pointed to the fact that with the increased uptake of renewable energy, there is also an increased need to even out high fluctuations on grids. In this way, he said: “2nd-life battery storage units are a very sensible supplement.” Gassmann also pointed out, that in addition to these benefits, the further utilisation of pre-used car batteries is a more sustainable (and economic) use of valuable raw materials.

For their part, cooperation partner BJEV sees itself as an “expert in areas such as charging and battery swap infrastructure and battery 2nd-life usage”. Ye Xiaohua, deputy managing director of BJEV, hopes that the cooperation with Mercedes-Benz Energy will bring “long-term and stable benefits” in energy management. Both companies announced that the current project serves as a basis for potential future collaborations.

Mercedes-Benz Energy is based in Kamenz, Germany and initially manufactured photovoltaic home storage units. In the meantime, the Daimler subsidiary has withdrawn from the business and is concentrating on the Second Life use of disused batteries. In Germany, MB Energy and its partners are already operating three large storage facilities with a total capacity of 40 MWh from former electric car batteries.

Daimler has held a minority interest in BJEV since last year. Its parent company BAIC, also a Daimler cooperation partner, acquired a five per cent stake in the German group in July.