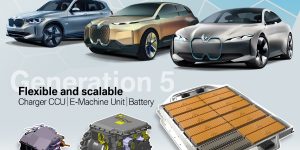 Next year, with the iX3, the first BMW with the “fifth generation” of the Bavarian carmaker’s electric drives will go into production. BMW has now added further details on the eDrive unit that will also be used in the i4 and iNext from 2021.

In their press release, the German manufacturer emphasises more than ten years of experience in electric mobility has flowed into the new drive with BMW Group’s in-house development. Since the new drive combines the electric motor, power electronics and transmission in a central housing, the installation space and weight of the highly integrated drive have been “significantly” reduced in relation to the power provided.

In the iX3, the electric drive used as the rear motor will have an output of 200 kW, and the power density in the 200 kW version will be 30 per cent higher than in the drives previously used. An interesting detail for the drivability of the iX3 is that the torque of 400 Nm is to be maintained even at high revs “thanks to special design features”. Since the drive unit is to be flexibly scalable, it can be used in “different vehicle concepts and segments” according to BMW without going into the performance spectrum with more details.

BMW also mentions provisional range and fuel consumption figures: In the WLTP, the iX3 is expected to have a range of more than 440 kilometres, with BMW indicating provisional consumption of “less than 20 kWh/100 km”. The battery has a net energy content of 74 kWh. In comparison, a Tesla Model 3 with a long-range battery and all-wheel drive has a WLTP range of 560 kilometres – with a system output of 317 kW and a net energy content of 75 kWh. Nevertheless, BMW writes that “Thanks to the favourable efficiency of its drive components and the high energy density of the high-voltage accumulator, the BMW iX3 achieves a range that conventional electric vehicles can only achieve with a significantly larger and correspondingly heavier battery. BMW has not stated the weight of the ready-to-install battery of the iX3 in their press release.

BMW has given more details about the cells used. These will probably be supplied by CATL, the iX3 will be built by the joint venture BMW Brilliance in Shenyang, China. The prismatic cells are still based on NMC-811 technology, the cobalt content could be reduced by “another two thirds” according to BMW. The gravimetric energy density at cell level has improved by around 20 per cent compared with the battery cells previously used in the company.

Although, BMW has not given further figures on the cells or the finished high-voltage accumulators, according to earlier reports, BMW is planning with battery sizes of 60, 90 and 120 kWh. What is interesting here, is that in the current report, BMW mentions only the net energy content of the iX3 battery of 74 kWh, but no gross value. If this is 90 kWh gross, the unused buffer would be relatively large – but this has not been confirmed by the manufacturer.

It is clear that the carmaker is very convinced of the high-voltage storage system. “In the sum of all relevant aspects, especially with regard to longevity and safety, BMW high-voltage accumulators show the optimum of what can be presented today,” the Munich-based company writes confidently. The iX3’s battery cells are also the first to be manufactured according to BMW’s recent change in resource strategy of buying the cobalt and lithium itself and then passing it on to the cell manufacturers so that the automaker can achieve the highest possible traceability along its supply chain.

The cobalt comes from mines in Morocco and Australia, and BMW recently signed supply contracts with an Australian mine for the lithium. The mining operations there are expected to consume significantly less water than the well-known lithium mines in South America. The cells themselves will be built for the fifth eDrive generation from CATL and Samsung SDI. In November, BMW placed orders worth billions here to secure its battery requirements until 2031.

After the cells are manufactured according to BMW specifications the carmaker then groups the supplied cells into modules and assembled into the finished battery packs according to the relevant model. As is customary in electric SUVs, the high-voltage memory in the iX3 is located in the vehicle floor. According to BMW, there should be no loss of space for passengers and the boot compared to a conventionally powered X3.