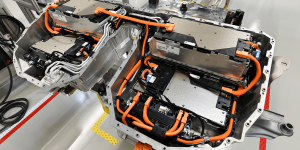 The BMW Group has just concluded a supply contract with Ganfeng Lithium based in Jiangxi, China, with a forecast volume of €540M for the supply of lithium hydroxide for battery cells. The lithium will be extracted in Australia with deliveries to start next year.

The carmaker claims to cover 100 per cent of its lithium hydroxide requirements for its fifth-generation batteries. The contract term runs over five years (2020 – 2024). Ganfeng’s lithium is extracted by mining from so-called hard rock deposits in Australia, whereby according to BMW “the highest standards with regard to sustainability” apply.

With the switch to the fifth generation of electric drives, BMW is also facing a paradigm shift in its purchasing policy: from 2020, the Munich-based company will buy the two critical raw materials – cobalt and lithium – directly from the mines. For cobalt, this will mean mines in Morocco and Australia, in the case of lithium, this will again mean sourcing the “land from down under”. BMW then makes these raw materials available to the cell suppliers so that they can use them for the BMW cells. In November just passed, BMW placed significant orders with CATL and Samsung SDI for this purpose. BMW hopes that this will provide the best possible transparency regarding the origin of the raw materials and thus ensure compliance with environmental standards and human rights.

“Alongside cobalt, lithium is one of the key raw materials for electromobility. With the signing of this contract, we are securing our lithium needs for battery cells,” says BMW Purchasing Director Andreas Wendt according to the car manufacturer’s press release. “Sustainability is an important aspect of our corporate strategy and plays a central role in expanding electromobility. We are fully aware of our responsibilities: Lithium and other raw materials must be extracted and processed under ethically responsible conditions.” Wendt promises.

Demand will continue to rise, and by 2023 BMW plans to have 25 electrified models with various sizes of lithium-ion batteries on offer. Wendt expects lithium use to increase sevenfold by 2025 – at BMW alone.

BMW itself does not manufacture any cells on an industrial scale and does not have any, as BMW CEO Oliver Zipse emphasised at the opening of the “Battery Cell Competence Centre” in November. “It is not important to produce the cell yourself,” said Zipse at the time. “It’s essential to know what you want from the supplier,” said Zipse. That’s why BMW is researching cells and their production, technology and format. Together with a supplier, the cells are then made ready for series production and industrially manufactured for BMW.

Zipse expects that an established market for automotive battery cells will develop in the coming years, as has happened with other components. Zipse refers, for example, to turbochargers for combustion engines, which no carmaker produces itself. In the long run, however, he does not want to rule out producing battery cells themselves: “If it should become necessary one day, we will be able to react”. Wendt made a similar statement in the current (German) press release: “Whether we will produce the cells in series at a later point in time depends largely on the development of the supplier market”.

At the opening of the Research Centre, Peter Zisch, who is one of the people responsible for purchasing lithium and cobalt at the Group, justified BMW’s decision in favour of lithium from Australia based on mining methods, among other things. “The lithium is extracted from the stone there using much less water than, for example, lithium mining in Latin America,” says Zisch. However, BMW does not want to completely rule out the possibility of obtaining this vital material from Latin America. “We have looked at a great many mines in the region, some of which are very sustainable in their use of water. So it’s not just the mining area or the land that counts, but even the specific mine.”