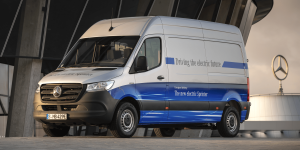 Mercedes-Benz eSprinter went into series production a few days ago. The German carmaker has revealed more details on its recuperation, usable battery capacity and ecosystem.

Here, the term ‘ecosystem’ refers to all systems related to the fleet operation of the eSprinter. In this context, Mercedes-Benz presented the eCharging Planner developed in cooperation with customers. This web-based tool carries out an individually tailored analysis for the switch from conventional to battery electric vehicles and also takes EVs from other manufacturers into account.

According to the manufacturer, the eCharging Planner will further deepen the existing range of consulting services, which are based on parameters such as operating times, typical driving profiles, ranges and charging times. Among other things, this helps when considering total operating costs. The background to the information is that questions about the charging infrastructure are frequently asked during customer meetings. The instrument – which is also used in a similar form by Daimler’s truck division – provides answers to the questions as to whether all vehicles could be charged simultaneously at the depot, whether the current power supply was sufficient or whether additional installations were necessary.

Mercedes-Benz also mentions new details about the eSprinter itself. Series production of the electric transporter began a few days ago in Düsseldorf. Potential buyers can now find out, among other things, that there will be four different recuperation modes. The four stages “D-“, “D”, “D+” and “D++” are selected via the steering wheel gearshift paddles and range from anticipatory driving with only one pedal (D-) to the quasi “sailing” eSprinter (D++).

The 85 kW electric drive with a torque of up to 300 Nm can meanwhile be configured to a maximum speed of 80, 100 or up to 120 km/h as reported. With AC, the eSprinter can be charged with a maximum of 7.4 kW; at a DC charging station it is 20 kW ex-works – but 80 kW is also possible as an option. With this option, around 80 per cent can be recharged in 80 minutes, with the standard charger it takes correspondingly longer.

The standard variant “E” offers the best mix of driving, range and interior comfort. The maximum drive and heating power is available underdrive level “C”, and “E+” is virtually the range-optimised economy program in which drive and heating power are reduced accordingly. A more detailed description of the driving experience in the eSprinter was made by Mercedes-Benz Vans to test the cold protection in northern Sweden in March this year.