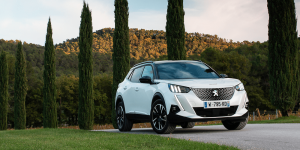 The Peugeot e-2008 is available to order now in the UK, with full pricing and specification announced. Prices start from £28,150 in Active trim, including the £3,500 Plug-In Car Grant.

The price comes as an update, as the car had previously been announced to retail for £32,000, including the plug-in grant. The most expensive trim options will cost £34,275 for the GT spec.

Similarly to the popular Peugeot e-208 compact car, the electric SUV e-2008 also sits on the e-CMP platform PSA developed together with Dongfeng. In fact, the technical data is near identical to that of the e-208, mainly based on the fact that both have an electric motor with 100 kW and a 50 kWh battery. Due to the slightly higher weight and drag of the SUV, the WLTP range of up to 310 kilometres in the e-2008 is slightly shorter than that of the e-208 (330 kilometres or 193 miles). The battery warranty is eight years or 160,000 kilometres, based on 70 per cent of the charging capacity. The electric car is capable of 100kW fast-charging, which will recharge the battery to 80 per cent in just 30 minutes, while topping it up on a conventional 7.4kW charger will take 7.5 hours.