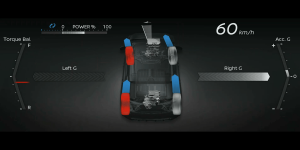 Nissan is presenting its e-4ORCE four-wheel-drive control technology for twin-motor electric cars at the CES in Las Vegas. The technology uses both the front and rear motor for recuperation and is designed to provide high-precision engine and brake control.

The name e-4ORCE stands for the word “force” in combination with four-wheel drive (“4”) and electric mobility (“e-“). According to Nissan, the technology provides instant torque to all four wheels to deliver balanced, predictable performance. The company speaks of a “handling that is on par with many premium sports cars”. In fact, premium manufacturers like Porsche are already pursuing this issue: The engineering arm of the German company recently announced the development of software that will be able to regulate the torque control for all four wheels of a four-motored electric SUV with extreme precision.

According to Nissan: e-4ORCE technology is supposed to make driving in electric four-wheel-drive vehicles noticeably smoother and more stable thanks to the exact interaction of power and braking performance. The dual-use of regenerative braking systems should make stop-and-go traffic in the city more pleasant, and the torque control system is supposed to keep the vehicle precisely on the line the driver is aiming for. In addition, engine control is optimised on rough, bumpy roads and during acceleration, according to the accompanying Nissan press release by.

“The e-4ORCE twin-motor all-wheel control technology offers precise handling and stability, which gives drivers greater confidence and even more excitement than ever before,” said Takao Asami, Senior Vice President of Research and Advanced Engineering at Nissan. “This technology enables excellent cornering performance and traction on slippery surfaces and comfortable ride for all passengers.” It is the result of experience gained in developing the torque distribution system for the Nissan GT-R (“ATTESA E-TS”) and the smart 4X4 system for the Nissan Patrol.

At the CES, Nissan will present the e-4ORCE technology in its all-electric Ariya Concept, which was first shown in Tokyo in autumn. The electric SUV study already provides a fairly concrete outlook on a future production model, which is expected in about two years. In addition, the e-4ORCE system has also been installed in another twin-engined test car in Las Vegas.

Update 07 June 2020: Nissan provided an update on this e-4ORCE four-wheel-drive control technology with a new article and video. According to Nissan, this technology is now in the final stages of development.

The short video, which once again shows the Leaf converted to an electric all-wheel drive, provides little information about the drive technology. At the same time, a graphic briefly shows that the drive power is not only distributed between the front and rear axle but also between the wheels on the inside and outside of the curve – as announced in January. But see for yourself:

The Japanese company states that the focus in development is not on the pure performance and acceleration of an electric car. Instead, Nissan say they pursue “a balanced, customer-oriented approach – beyond mere speed”. Of course, Nissan is not yet revealing how this solution differs in detail from electric four-wheel-drive systems already on the market.

But the core of the system seems to be particularly precise control of the electric motors – according to Nissan’s idea, it ensures a more relaxed ride for the driver and passengers when the driver has the best possible control over the drive. “This technology offers a new level of control,” says Ryozo Hiraku, head of Nissan’s technical drive and EV department. “The control technology of e-4ORCE is different from other four-wheel-drive systems for electric vehicles available today. We have done extensive fine-tuning to achieve precise performance that supports the driver’s intentions for a comfortable ride in a variety of conditions.