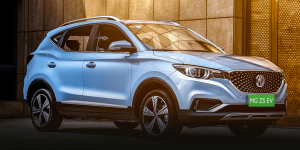 EV interest is running high in India with MG Motors receiving close to 3,000 reservations for its all-electric SUV ZS in less than a month. Essentially the electric car has sold out before launch so the company has halted bookings – for now.

The tally so far hits a little over 2,800 units in 27 days, leaving MG to cater for 2,409 of the bookings received from the markets where the electric SUV MG ZS will be initially launched first – Delhi/NCR, Mumbai, Ahmedabad, Bangalore, and Hyderabad.

It seems that the company has hit the sweet spot of electric vehicle ownership in India, while on one hand, making use of the government’s subsidies for EVs and infrastructure, on the other hand, offering “sustainable luxury” for an attractive price.

40% of the bookings were undertaken online, showing another shift in consumer behaviour in the world’s largest electric vehicle market. India holds this title (over China followed by USA) with the preference for electric rickshaws and three-wheelers.


Rajeev Chaba, President & MD, MG Motor India, said, “MG Motor India entered the EV space as a catalyst for the country’s nascent EV revolution by providing a complete, end-to-end ecosystem. The overwhelming response that we have received for the ZS EV validates our faith and highlights how ready the consumer market is for a new-age EV proposition when provided with the best-in-class product and infrastructure.”

Just last month MG Motors announced plans to develop an improved battery for their upcoming electric SUV ZS EV in India, which will feature a 73 kWh capacity and a theoretical range of 500 km. The manufacturer added that it will weigh the same as the current 44.6 kWh version.

The ZS uses a front electric motor with 105 kW and 353 Nm of torque from a 44.5 kWh lithium-ion battery pack. The battery has been mounted underneath the car, which is capable of fast-charging.

In July of last year, Daniel Gregorious, Head of Sales & Marketing at MG, said: “With an exciting £21,495 price point at launch, ZS EV is a compelling option for customers who want to switch from old school petrol and diesel cars and enjoy all the wonderful benefits of electric motoring.” That being said, the model was still twice the price of its combustion engine counterpart, although of course customers save on fuel and maintenance costs.

MG Motors says that the ZS EV has already registered significant interest in more than 10 international markets such as the United Kingdom, Europe, Australia, and Southeast Asia, revealing that the model received more than 2,000 orders within weeks of launch in the UK & Thailand respectively.