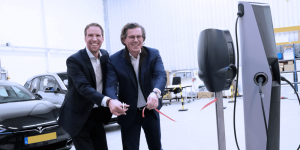 In Amsterdam, EVBox has opened what they are calling the Lab Space. Thanks to the new site, the company says it can test all of its future charging stations on actual vehicles. The facility should thus also be home to research and development of new charging technologies.

The Lab Space will house the EVBox R&D, the Product Expert team and the Product Validation team. Of course, both AC and DC tests will be carried out as well as further developing load balancing and bidirectional charging (V2G) technologies.

“The EVBox Lab Space has already proved its worth with some of the advanced charging and secure communication testing that we’ve executed on new cars that will enter the market in a later stage. This dedicated space will bring EVBox’s research and development centre to the next level to match the market’s needs,” explained Arjan van Rooijen, CTO of EVBox.

The Dutch EV charging specialist has been keeping busy. Just this month EVBox has presented its Troniq 100 rapid charging station with up to 100 kW charging power at CES. And two months ago, 308 EVBox chargers were installed by Engie as part of a project in the port of Zeebrugge, the location of the largest onshore wind farm in Flanders with a total capacity of 44 MW. EVBox is part of Engie as Engie Digital acquired the company in 2017.

Electric cars: How green do you charge? The renewable developments.