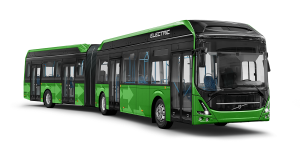 The 60 articulated electric buses are to be delivered between January and April 2021 and will be used on routes 5 and 7 in Malmö. The vehicles now ordered are the 7900 Electric Articulated model, which will be introduced in autumn 2019. The buses of this type can transport up to 150 passengers.

However, Volvo Buses has not indicated whether Nobina has ordered the 18 or 18.7 metre version of the bus. Nor does Volvo state the exact battery capacity of the vehicles (maximum possible is 396 kWh). The vehicles are charged by CCS in the depot or via pantograph quick loaders along the route. Official values for charging times or performance are also not given by the manufacturer.

In November Volvo Buses had already received an order for 157 units of the 7900 Electric Articulated from Transdev. The vehicles are to be used in Göteborg. “Within a short time we have received orders for around 220 electric buses from two of Sweden’s largest cities,” says Håkan Agnevall, President of Volvo Buses. “This shows that electric buses are already a viable solution for cities that want long-term sustainable public transport – buses that really do improve the environment.

As reported, 13 Volvo electric solo buses have already been put into operation in Malmö in December 2018. For the shorter version of the Volvo 7900 Electric, several fast loaders with the OppCharge open charging interface have already been installed in the city – for example at the terminal stops of Line 7, where the new articulated buses are also to be used. Here, charging times of three to six minutes were mentioned, but the batteries of the solo bus are smaller.