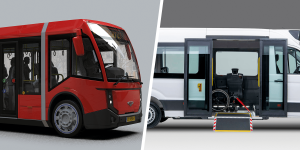 While the VW e-Crafter on display is an official conversion by Tribus, the Movitas bus exhibited in Berlin is not a retrofit, but an in-house development by Tribus. According to the announcement, the company designed the electric bus in a modular way and offers it in three different lengths: 8.20 m, 8.95 m and 9.70 m. With its lightweight construction and agile handling, the EV should be particularly suitable for use in city centres.

The modular battery can be installed in the underbody or rear and charged either slowly in the depot or “opportunity charging”, according to the press release, which does not give further information about the vehicle’s electric drive. Values such as the capacity, charging power or performance data of the electric motor are not quantified, nor is the range. The Movitas is said to differ from other city buses “by features focusing on energy efficiency for maximum range”. A “special “heat pump” is mentioned, which is to use the waste heat from the drive for underfloor heating. Besides, the double-glazed panoramic windows should provide good insulation.

A little more information was made available about the VW e-Crafter converted by Tribus. The vehicle has eight seats and two wheelchair places including wheelchair lift in the rear. Tribus speaks of a “practical range” of up to 150 kilometres, and the battery can charge by direct current in just one hour. The project was launched in early 2019 in cooperation with VW Netherlands to develop a wheelchair-accessible electric mini-bus. Even in the converted version, the e-Crafter has a European type approval and anyone holding a regular driving licence can drive it.