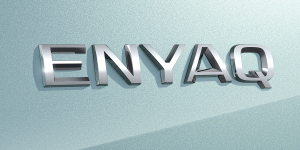 Škoda has announced that its first purely electric SUV will be called Enyaq. With this model, the Czech brand is establishing a new family of names that combines the ‘E’ as a reference to electric mobility with the ‘Q’ in the name of its SUVs.

The Volkswagen subsidiary’s combustion SUVs are called Kodiaq, Karoq and Kamiq. The new electric SUV is given a coherent name with Enyaq, whereby “Enya” is the Irish word for “source of life”, Škoda explains.

At the Geneva Motor Show 2019, Škoda presented the Vision iV, a close-to-production view of the Enyaq and the first Czech electric model based on the Group’s MEB modular system. The concept’s data on the drive system and battery are identical to those of the Audi Q4 e-tron concept. The four-door crossover coupé, for example, is powered by two electric motors that deliver a system output of 225 kW to the road. Mounted on both the front and rear axles, they turn the Vision iV into a four-wheel-drive vehicle that can reach 180 km/h at its peak. The model demonstrates its sprinting capabilities from 0 to 100 km/h in 5.9 seconds and from 80 to 120 km/h in under 4 seconds. The production vehicle based on the Vision iV – the Škoda Enyaq – is scheduled for market launch later this year.

Škoda recently launched the Citigo e iV, a purely electric compact car. This is the sister model to the VW e-Up and the Seat Mii electric. In addition to the Škoda Enyaq, the Czech Volkswagen subsidiary wants to launch at least ten more electrified models under the umbrella of their sub-brand Škoda iV by the end of 2022. By 2025, Škoda expects a sales share of 25 per cent of purely electric and plug-in hybrid vehicles.