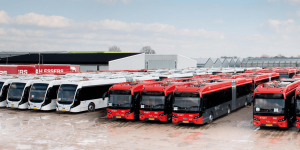 VDL Bus & Coach is introducing a new battery package for its electric buses. In addition, the Dutch company is planning to build a plant in Roeselare, Belgium, and announced that the 670 Citea Electric buses currently in service in Europe have passed the 50 million kilometre milestone.

“Over the past year, we have further expanded our position in e-mobility and also strengthened it geographically,” says company boss Henk Coppens. Now, in addition to the planned expansion into Southern Europe, the focus is shifting to further optimisation of energy consumption and the application of the next battery generations. “In addition to the many operations that use fast charging, we also see the market’s need for greater range, especially now that more and more regional operations are also being electrified.”

Against this background, the planned plant in Belgium will play a key role. “The new factory in Roeselare will be our centre for e-mobility, enabling us to respond even better to the needs and demands of the market,” says Coppens. This is important, he said, because competition will intensify. Specifically, the ground-breaking ceremony is to take place in Roeselare, Belgium, this spring and CO2-neutral electric bus production is to start at the end of 2021. The Belgian sales and service branch of VDL Bus & Coach will also move to the new location.

Finally, VDL emphasises that the 670 Citea Electric buses that have been delivered throughout Europe to date have now accumulated to 50 million emission-free kilometres. According to their own figures, the Dutch company has a market share of 22 per cent in Europe. After the Netherlands, Scandinavia is their most important market. Thanks to new projects in Norway and Denmark as well as two projects in Sweden and Finland, a total of 120 electric buses are in operation. “We are also recording strong growth in Germany,” says VDL manager Alex de Jong. “Cities such as Osnabrück, Cologne and Münster are again investing in our buses because we have proved to be a strong partner in recent years”. Kiel has also ordered 36 electric Citeas. In Cologne, the bus manufacturer was even awarded the contract to supply 53 electric buses.