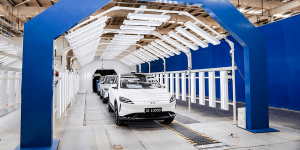 In view of the sharp drop in electric car sales, the Chinese government is considering extending its subsidies for new energy vehicles beyond this year. This comes contrary to the government’s original plan of phasing out those subsidies.

News of the change in approach comes from a Bloomberg article claiming to have the information from insiders who want to remain anonymous because talks are still private. According to these sources, political decision-makers have been discussing various ways to revive the market after the sharp drop in sales following the phase-out of state subsidies for electric vehicles. The word is that talks are still at an early stage and there is no guarantee that the subsidies will be extended.

As things stand at present, central government subsidies are due to expire at the end of 2020, although there may be other regional support measures in some areas. In July 2019, the government cut subsidies for new energy vehicles, which includes plug-in hybrid cars and fuel cell vehicles. VAT exemptions are still in place.

Also, in an effort to focus the wild electric car startup environment in China, the government tightened regulations for startups. The country with the world’s largest electric vehicle market also changed its number-plate allocation laws both moves have enabled non-Chinese vehicle manufacturers more of a look-in than was previously the case.

However, sales have slumped massively in the second half of the year (the whole of 2019 was only slightly in the red due to the strong first half) and the situation in January 2020 got worse (-54 per cent down on January 2019, partly due to the coronavirus). As a result, Beijing now seems to be discussing a number of different scenarios. Early in the year, Miao Wei, China’s Minister of Industry and Information Technology, launched an attempt to calm the markets and announced that there would be “no significant cuts” in the e-car subsidy this year, but it seems more is required.

According to the industry association CAAM (China Association of Automobile Manufacturers), the overall automotive market declined last year. Although China is still by far the most important market for electric mobility, in 2019 unit sales will have lost four per cent compared to the previous year. Last year, 1,204 million electric vehicles (the CAM includes battery-electric cars and plug-in hybrids) were newly registered in China; in 2018, the figure was 1,255 million vehicles. “Since the reduction of electric car subsidies in mid-year, the electric vehicle market in China has literally collapsed,” writes CAM. In 2019, China will “fail as the locomotive of the global e-mobility ramp-up” for the first time.

The main beneficiaries of extended subsidies will not only be Chinese manufacturers such as BYD, BAIC and smaller companies such as Nio but also companies like Tesla with the Model 3 made at the Gigafactory 3 near Shanghai.