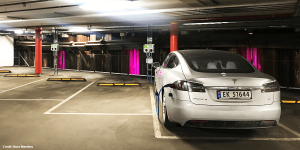 In the two most important markets for e-mobility, new car sales in 2019 as a whole were down, as CAM notes in its latest industry study Electromobility Report 2020. Germany, on the other hand, has the highest gains worldwide – if you include PHEVs.

In the current evaluation, the team of the Center of Automotive Management (CAM) around its head Stefan Bratzel has analysed the new registration figures of the most important car markets for electric cars and plug-in hybrids for the full year 2019. As in the interim reports for the quarters, the analysis covers China, the USA, Norway, Germany, Great Britain, France and the Netherlands.

In terms of unit sales, China is still by far the most important market for electric mobility, but in 2019 it will have lost four per cent compared to the previous year. Last year, 1.204 million electric vehicles (the CAM includes battery-electric cars and plug-in hybrids) were newly registered in China; in 2018, the figure was 1.255 million vehicles. “Since the reduction of electric car subsidies in mid-year, the electric vehicle market in China has literally collapsed,” writes CAM. In 2019, China will “fail as the locomotive of the global e-mobility ramp-up”. 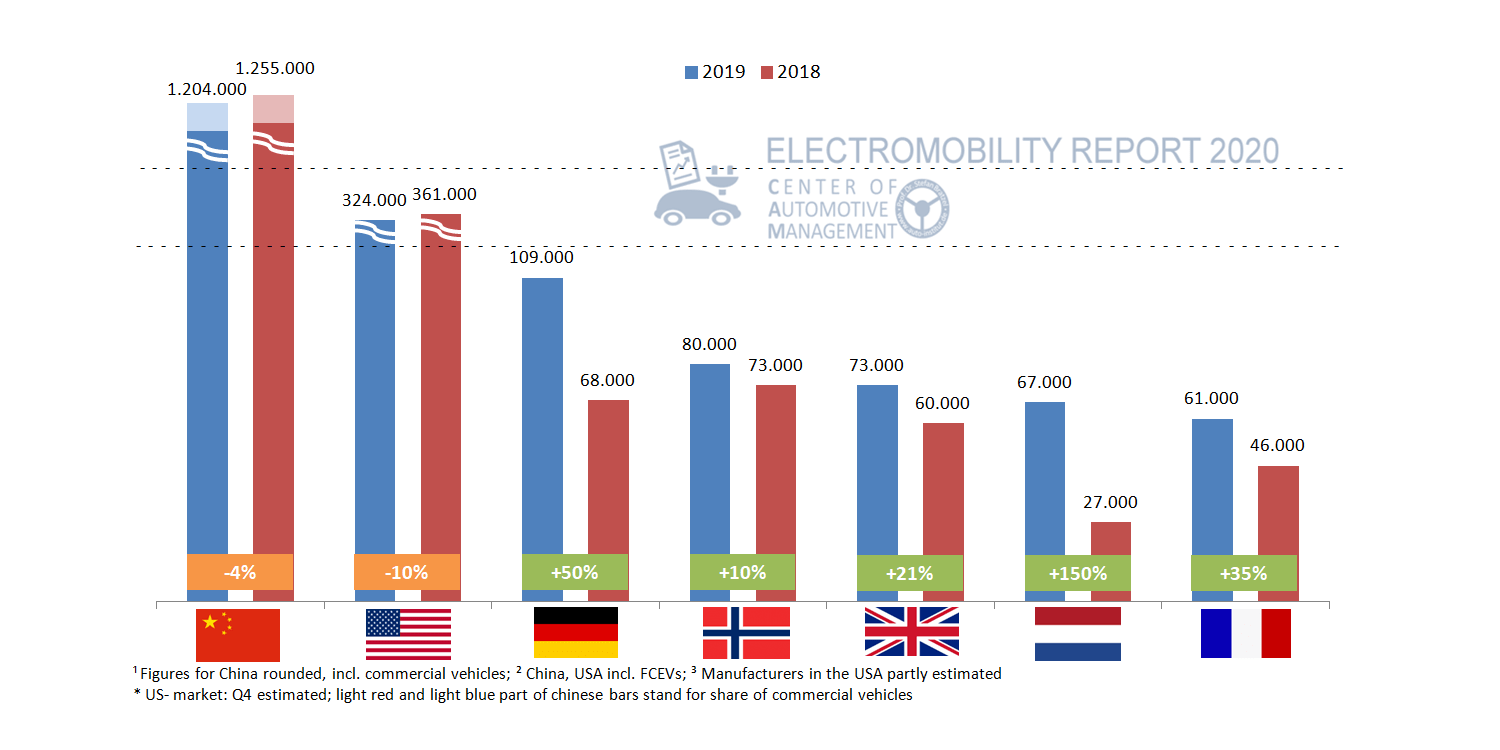 And yet, with 972,000 BEVs and 232,000 PHEVs, China is and remains by far the number one worldwide. And because of the strong first half of the year, the share of electric vehicles in the overall market is nevertheless rising from 4.5 to 4.7 per cent.

In the US, the EV market also shrank in 2019, with 324,000 electric vehicles registered, ten per cent less than in 2018 (361,000) – the figures for the fourth quarter are not yet available, but have been estimated by CAM. Overall, the market share of electrified cars in the USA will drop from 2.1 per cent to 1.9 per cent. Around 75 per cent of the EVs sold are battery-electric. CAM does not list any explicit reasons for the decline in the US, but the declining tax credits for the two largest manufacturers Tesla and General Motors, as well as the market launch of the Model 3 in Europe (for which cars produced in the US were exported instead of sold on the domestic market) and the general promotion policy under the current US administration, may have played a role.

In Europe, Germany has established itself as the leader and globally as the third-largest market. It was only at the end of the first half of the year that Germany overtook Norway in terms of absolute registrations, with 109,000 electrified vehicles in Germany (+50 per cent) and 80,000 electric cars in Norway (+10 per cent) at the end of the year.

However, Germany’s performance is not only due to BEVs, especially in the final quarter, but more PHEVs were also registered than BEVs – the company car tax is probably showing its effect. While China with 81 per cent and the USA with 75 per cent have a relatively high BEV share among electric vehicles, the figure for Germany is only 58 per cent. “Due to the expanded range of plug-in hybrids such as the BMW 330e, the Audi A6 TFSI e or the Mercedes-Benz C 300, sales of PHEVs tripled in the last quarter of 2019 compared to the same period last year,” CAM says.

In terms of absolute figures, Germany may have overtaken Norway, but when it comes to the proportional share of the total market, the Norwegians are way ahead of the Germans. Over the year as a whole, the pure BEV market share was 42.2 per cent; if you add it up like the CAM, BEV and PHEV, you even get an electric share of 55.9 per cent. Overall, the BEVs in Norway are again significantly stronger than in Germany: among the electric vehicles, they account for 76 per cent, 24 per cent are PHEVs. 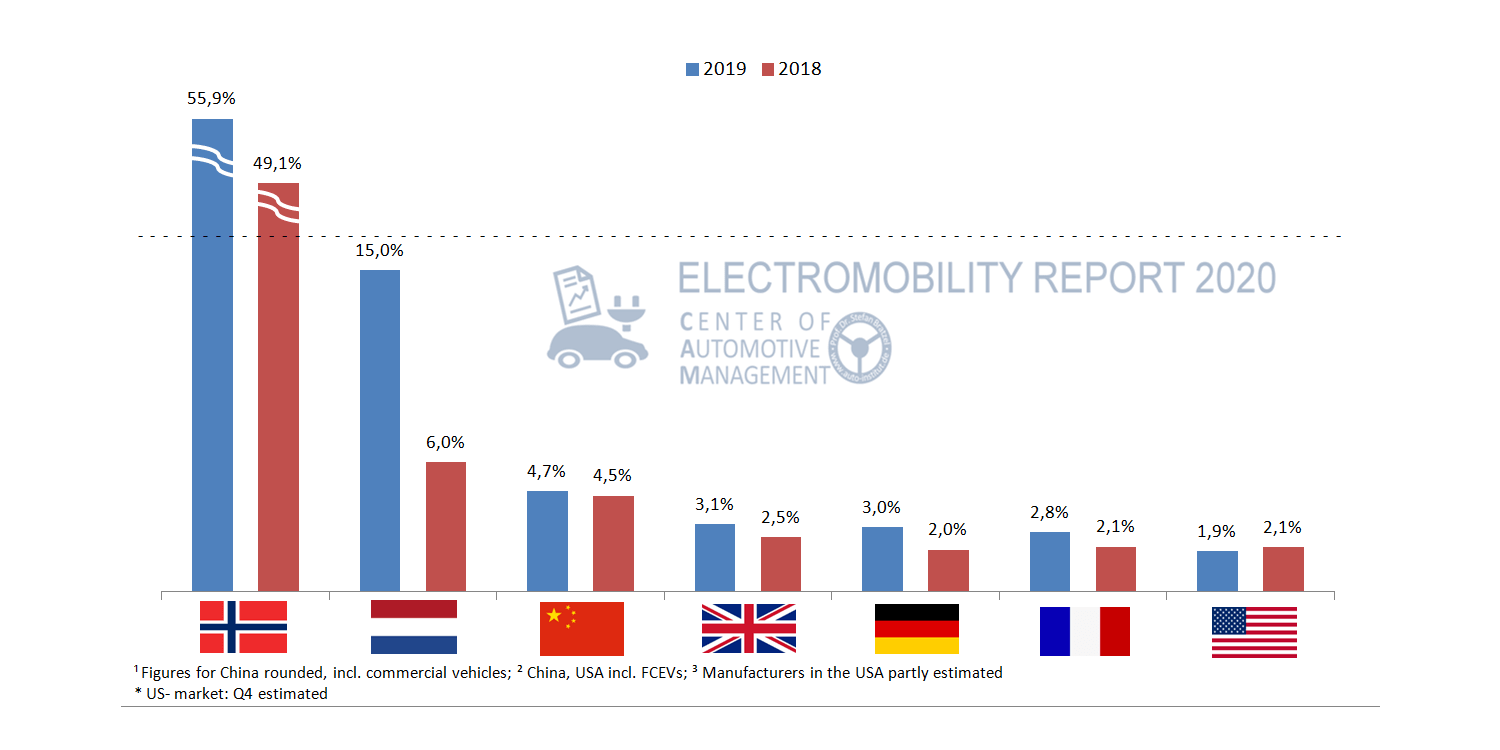 In the other European countries, Great Britain has around 73,000 electric vehicles, while in the Netherlands, with strong growth of about 150 per cent, around 67,000 new passenger cars have now been registered. In terms of total sales, the small Netherlands is thus overtaking France.

With this extreme growth, the Netherlands has jumped to second place in terms of market share with 15.0 per cent, behind Norway with the 55.9 per cent mentioned above. It is followed by China (4.7 per cent), Great Britain (3.1 per cent), Germany (3.0 per cent), France (2.8 per cent) and the USA (1.9 per cent). A small drop of bitterness for the positive market development in the Netherlands: The trigger for the strong market growth is the reduction in tax benefits for electric vehicles next year, and Tesla’s Model 3, in particular, benefited from this in the last quarter. In December 2019 alone, around 12,000 new Model 3 vehicles were registered in the Netherlands.

Given all these subsidy-driven effects in China, the USA, Germany and the Netherlands, study leader Bratzel describes 2019 as a “transitional year for electric mobility with ambivalent trends”. “It is evident that the sales dynamics in both a positive and negative sense are influenced to a considerable extent by regulatory framework conditions,” the professor says. “To avoid misguided policies and the resulting market distortions, policymakers must design long-term funding frameworks that address environmental, social and economic policy objectives. In Germany in particular, Bratzel sees a need for adaptation, “for example concerning the ‘species-appropriate’ promotion of plug-in hybrids or also with regard to the duration and amount of the promotion”.

Volvo looking to build electric XC-90 in the USA