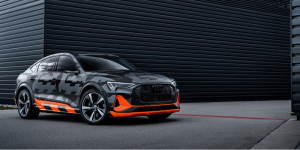 The “S” is used by the luxury carmaker in the sports versions of several volume models. Audi’s e-tron now also gets sporty company. As S variants, Audi says the e-tron and the e-tron Sportback will be even more “agile, sharp and dynamic.” The German carmaker is keen to point out that these are the world’s first electric cars with three engines to come off the assembly line in mass production and that everything is running smoothly. At the same time,  at Audi’s plant in Brussels, the assembly lines are currently at a standstill. Yesterday, the manufacturer announced that production of the e-tron will be completely stopped for a few days due to supply problems with vendor parts.

But back to the triple-engined S models: How does the performance of these engines interlock? The larger electric motor that drives the rear axle in the e-tron 55 models is mounted on the front axle of the sporty duo in a modified design and is designed for 124 kW output or 150 kW in boost mode. The smaller electric motor now operates in modified form at the rear, together with an identical counterpart and both together produce 196 kW of power and 264 kW in boost mode. The cumulative system output amounts to 320 kW and 808 Nm torque. Thanks to built-in cooling, the drive system delivers “reproducible full boost power of 370 kW and 973 Nm for eight seconds at a time,” according to Audi. The duo thus accelerates to 100 km/h in 4.5 seconds, with the propulsion ending at 210 km/h with electric control.

When the S models are on the road in normal traffic, their drive is programmed for efficiency. In other words, the front electric motor is unpowered and only switches on when the driver demands more power or when the grip decreases with low friction or fast cornering. Audi engineers have created a system for variable torque distribution on the rear axle that is tailored to the electric four-wheel drive. According to the company’s head office, electric “torque vectoring” has made it possible to transfer the advantages of the conventional sports differential to the electric age. In practice, the two rear electric motors send the drive forces directly to the wheel via a transmission. The result is “a more agile driving and self-steering behaviour and thus a higher cornering speed”, says Audi. Another advantage of the system is traction: “If one rear wheel is on a road surface with a low coefficient of friction when accelerating, the torque can be distributed precisely and quickly between the two engines.

The S variants can be charged with up to 150 kW (DC) or 11 kW (AC). According to Audi, the rapid charging capability is guaranteed by an elaborate thermal management system with heat pump, which cools and heats the battery, the interior and the electric machines with four circuits.

As standard, the duo drives on 20-inch light-alloy wheels, but wheels up to 22 inches in size are optional. In order to achieve the lateral dynamics typical of S, the tyre width is 285 millimetres. In terms of design, Audi is also pulling out all the stops for their S-models: black brake calipers with a red S highlight combines with sporty steering, accentuated front and rear bumpers, air curtains and optional digital matrix LED headlights – to name but a few of the features.

Update 01 July 2020: The German luxury carmaker has released information on prices and the market launch. Although the technical data for the three electric motors have been known since the announcement of the S models above, Audi has now added the range of the up to 370-kW-strong models (in boost): The e-tron S should have a range of 360 kilometres in the WLTP cycle, the Sportback 365 kilometres. It should be noted that these are still provisional values, since the final homologation is still pending. In comparison, the e-tron 55 Quattro has two electric motors and a power output of up to 300 kW, and sports a WLTP range of up to 436 kilometres.

The two electrically driven S models will be launched on the European markets in autumn 2020. Prices in the UK start from £87,000 for the Audi e-tron S and £88,700 for the e-tron S Sportback. The e-tron 55 Quattro is around £13,500 cheaper, while the basic e-tron 50 Quattro model with 230 kW and a smaller battery is around £23,900 cheaper than the top model with three engines at £60,000. The price differences are similar for the e-tron Sportback SUV coupé.