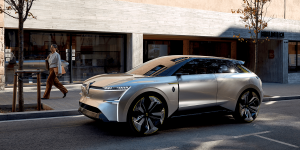 Renault’s new model study should show the way of future developments with the new CMF-EV platform. The Morphoz is distinguished through an interesting body extension, inductive charging capabilities and level 3 autonomous driving functions.

The idea of the Morphoz is that it can retain a smaller size with lesser battery capacity in “City” mode and – with the help of a specialized station – the electric car extends for longer distances and more luggage. Renault is using the study to highlight the Alliance’s new modular CMF-EV electric platform that they say offers several configurations with regard to power, capacity, user options and range.

The Morphoz is an electric crossover with a somewhat martial appearance. In “City” mode the vehicle has a length of 4.4 metres, which is about as long as a VW Tiguan. In this mode, the vehicle should have a 40 KWh battery that is supposed to enable a range of “up to 400 km.”

In “Travel” mode, or rather, after a visit to the appropriate extension station show in the video below, the Morphoz extends out to 4.80 metres. The car’s wheelbase is proportionately longer at 2.93 metres which allows it space for additional battery capacity with 50 kWh of power, making a total capacity of 90 kWh with more room inside. According to Renault, the extra battery increases the range to 700 kilometres and the electric motor then produces 160 kW instead of the 100 kW in City mode.

The Morphoz will be able to charge not only with a conventional cable but also by induction. This can be done at induction stations, such as specially equipped parking spaces or, in the future, over specially equipped sections of the road making it possible to charge while driving. Renault has not given more specific information on this technology, but it is currently being tested by a number of companies in different trials with almost every vehicle type. Renault announced headway on this front in September last year when a Renault Zoe was inducted in transit in a cooperation project with Israeli company ElectReon Wireless.

Gilles Normand, SVP, Electric Vehicles & Mobility Services, Groupe Renault explained that “Morphoz features our upcoming, high-performance electric cars. The dedicated modular CMF-EV platform optimizes the electric performances of the vehicle, and the long wheelbase with its flat floor and wheels that are rejected in all the 4 corners offer new possibilities for striking design and increased roominess.”

The long wheelbase of the CMF-EV platform with wheels at the very corners of the vehicle reduces overhang. Renault says that the chassis and structure has been optimised for a low centre of gravity thanks to the location of the batteries below the rear floor. This is also supposed to increase the vehicles aerodynamic performance.

Renault has designed the Morphoz for both private customers as well as sharing fleets. For this, the study has some specially adapted functions on board: the front passenger seat can be swivelled at the touch of a button so that the front and rear passengers sit opposite each other. An interesting detail here is that the seat is not turned, but folded down – the seat surface thus becomes the backrest and vice versa. There is also a new operating concept using so-called “live-screen” panels, i.e. particularly variable and integrated touch screens.

While it will be interesting to see what regulatory authorities will say about the extension function, series models based on the CMF-EV will likely soon produce more conventional electric vehicles. Renault and its development partners Nissan and Mitsubishi, expect the platform to allow more flexibility than mixed platforms: “It allows us to design, build, adjust and fine-tune electric vehicles more easily than with a platform designed for internal combustion engines (ICE) or for mixed ICE/electric applications.”