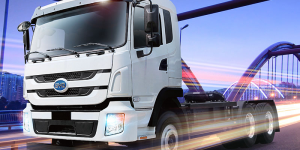 BYD has received another order from South America. Public transport provider Transcarsell from Ecuador has ordered 20 electric trucks from BYD for delivery by 2021, the first of which is scheduled for August 2020.

The electric vehicles ordered are heavy-duty trucks with a payload of 31.5 tons but can only be used over short distances. The lithium-ion batteries with LFP cells allow a range of 150 kilometres – but BYD does not specify how and in what load condition this value was determined. Transcarsell purchased 20 e-trucks to handle large multimodal containers.

Lenin Garzon, General Manager of Transcarsell, says: “I want my company to be the first of its kind to use trucks that will not only allow me to save but also help reduce the carbon emissions in our sector”.

According to BYD, Transcarsell should also be able to save money with the electric truck in the future because of the lower operating costs. Since the LFP batteries have a specified service life of 15 years, there should be little or no maintenance costs, at least for this expensive component.

In February 2019, BYD delivered 20 electric buses to Ecuador. In the city of Loja in the south of the country, a fleet of 37 BYD electric taxis has also been in operation since 2017.

BYD has had quite a good run so far in South America – mostly from bus fleets. Argentina has started electrifying its bus fleets with BYD buses, and in Columbia, Bogotá launched of a tender procedure for the purchase of no fewer than 594 electric buses that are to be integrated into the TransMilenio metro bus system this year.

Most notably though Chile has been a good customer to the Chinese company. In summer last year, Chile ordered 183 all-electric buses from BYD. Towards the end of last year, BYD launched Latin America’s first electric bus corridor in partnership with local operators Enel X and Metbus in the Chilean capital of Santiago.

In their press release about the electric trucks in Ecuador, BYD writes “BYD’s Latin American market is rapidly expanding, and its pure electric buses, taxis and trucks are successfully servicing markets in many countries across the region, including Chile, Brazil, Colombia, Argentina, Peru and Uruguay.”