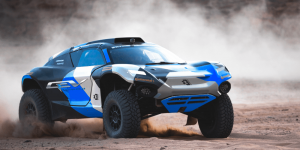 QEV Technologies have confirmed they will make up the fifth team for the premiere season of the Extreme E. The inter-continental electric motorsport spectacle will be broadcast by the BBC.

The racing series for fully electric 4WDs in remote locations will start in January 2021. The new and fifth team to join the event is the Spanish technology firm QEV that produces electric drives for hypercars, buses and motorsports. Miguel Valldecabres, CEO of QEV says: “Through this incredible challenge, we are sure we will be able to innovate and create technology that will once again be applied from race to road.” QEV Technologies will join ABT, HWA, Venturi and Veloce Racing for the premiere season of Extreme E for the premiere season of Extreme E

In the first season, the drivers will be limited to driving a standard car “Odyssey 21” developed by Spark Racing Technology. The manufacturers are allowed to slightly modify the bodywork to match the design of production cars, but changes to the drive system are not permitted in the opening set of events – Similar to Formula E, this will only be allowed in the course of time when manufacturers will be allowed to develop various components of the drive system themselves.

The cars themselves will be handed over to the teams in September, a few weeks later the first test drives are planned. Five events are planned from January 2021. The kicks off in the Sahara with an event around Dakar in Senegal. With the events at the remote locations, the series organisers Agag and former race driver Gil de Ferran want to draw attention to the consequences of climate change.


While the “mission” of the racing series remains unchanged, there has been a change in the media concept. Because of the remote locations and the race format with individual stages, the original plan was to show the races in the form of a documentary series. Extreme E has now entered into a multi-year partnership with BBC Sport and agreed that the new electric 4WD off-road racing series will be broadcast live and free of charge to British viewers on the BBC’s digital platforms.

The new ‘climate aware’ racing series show all-terrain electric cars compete in five remote locations across the globe with radically different environments from the Arctic to the Amazon. The BBC says that “scientists affiliated to the sport will also investigate the effects of climate change” in these locations. Events will be held in Kangerlussuaq in Greenland, the Amazon Rainforest in Brazil, Al-‘Ula in Saudi Arabia, the Nepalese Himalayas and Lac Rose near Dakar, Senegal.

Update 07 May 2020: In the meantime, the seventh team, Chip Ganassi Racing, has been confirmed for the premiere season of the Extreme E starting next year. The US team, known among others from the IndyCar Series, is the second American team on the Extreme E grid. Andretti (allied with BMW in Formula E) had already announced his participation.

“CGR boasts a tremendous heritage and pedigree in motorsport, achieving consistent success over three decades in some of the toughest single-seater and sportscar series around,” says Extreme-E founder Agag. “Of course, our championship poses a very different kind of challenge, but the team has proven itself to be a winner in every discipline it has contested and clearly possesses the skillset to similarly excel in Extreme E”

“It represents an opportunity in motor racing to use the latest technologies to attract a new, younger audience to this great sport of ours,” says team owner Chip Ganassi. “Everything about Extreme E is cool, from the car to the race format and the in-built technology.”

With Ganassi, the field of participants is also almost completely filled. Contrary to initial announcements, not twelve but only eight teams will participate in the premiere season. Agag justified this by changing the format. According to the current concept, the teams are to compete against each other in a knockout competition on two tracks of around ten kilometres in length. The limitation to two relatively short track sections for rally events is intended to reduce the ecological impact on site. In addition, it will certainly accommodate the range of unit cars.

The electric SUV racing series also announces that the teams’ driver pairings will each consist of one man and one woman. There will not be a fixed division as driver and co-driver. The teams can decide for themselves who will drive which race. “We are striving for equality, and this sporting format is the truest reflection of that goal,” says Agag. “Everybody will race together and the most effective combination of drivers, team, engineer and car will rise to the top.”

“The UK has an insatiable appetite for world-class motor racing and a groundswell of backing for sustainable technologies – particularly pertinent given the government’s plans to bring forward the transition to fully-electric motoring to 2035,” explained chief marketing officer at Extreme E, Ali Russell. Extreme E has already entered into similar partnerships for the USA, India, Malaysia, Italy, the Middle East and Belarus.

Fiat’s plans for an electric Panda in series production