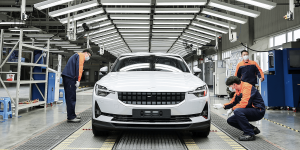 In Luqiao, China Polestar has kicked-off series production of the Polestar 2 BEV. The Volvo subsidiary’s all-electric car is to be launched on the European market first, with deliveries planned to start summer 2020 before coming to the US and China.

The fully electric hatchback sedan Polestar 2 is also the first model from the new Luqiao plant. The PHEV coupe Polestar 1 will be manufactured in Chengdu, China. As soon as production of the coupé, which will cost at least 155,000 euros, is discontinued there, the Polestar 3 will be built there as an SUV-like electric car – by the end of 2022 at the latest.

The start of production of the Polestar 2 in Luqiao is naturally overshadowed by Covid-19 these days: “The world is facing enormous upheaval in the face of the coronavirus pandemic,” says Thomas Ingenlath, CEO of Polestar. “We start production now under these challenging circumstances, with a strong focus on the health and safety of our people”. The start of production is “the result of huge efforts from the staff in the factory and the team securing the supply chain,” the executive added.

The Luqiao plant is also intended to leverage synergies between Polestar, Volvo and the parent company Geely. For example, the plant is owned by Zhejiang Geely Holding and is operated by Volvo Cars and is now building the Polestar electric car.

Until now, the Polestar 2 could only be reserved with a refundable deposit. Now, one after the other in Europe, the reservations will be converted into final orders, Polestar said in the announcement. In Germany, this will be the case “shortly”. In its current version with four-wheel drive, two electric motors with a system output of 300 kW and a 78 kWh battery for a WLTP range of 470 kilometres, the Polestar 2 is available at prices starting at £49,900 in the UK, $63,000 in the USA and €57,900 in Germany. A simpler version, probably only with one electric motor, will follow later.

The company has also appointed two more members to its board of directors: David Richter and Yankun Hou. David Richter is Chief Business Officer at the electric kick scooter company Lime, Yankun Hou is head of the industry groups for the Asia-Pacific region at the Swiss bank UPS. Chairman of the Polestar Board of Directors is still Volvo CEO Håkan Samuelsson.