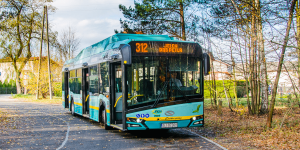 The Municipal Transport Company (PKM) from the Polish city of Jaworzno is buying 20 additional electric buses and has awarded the contract to Solaris. The contract provides for the delivery of 15 Urbino 12 electric and five low-floor Urbino 8.9 LE electric.

++ There’s been an update to this article. Kindly continue reading below. ++

According to the signed contract, the 9-metre long Solaris buses will be handed over to the customer before the end of this year. The 12-metre buses will follow in the first half of 2021. The PKM Jaworzno fleet will then number 43 electric buses.

Regardless of their respective lengths, all vehicles now ordered will be equipped with a 160 kWh battery. The buses will be charged either by cable in the depot or on the road using a pantograph (charging power up to 190 kW). Both the 9- and 12-metre buses are driven by a 160 kW central motor. The bus depot in Jaworzno referred to in the Solaris press release as the “Electric Mobility Centre”, is touted as one of the most modern depots in Europe. In the depot, eight buses can charge concurrently. Under a separate order, the operator intends to purchase another five pantograph charging stations and ten plug-in charging stations for the depot.

While the Urbino 8.9 LE can accommodate 55 passengers, the Urbino 12 electric can carry up to 75 passengers. In the version ordered by PKM Jaworzno, both models have comfort features such as USB charging sockets or a WLAN network.

Even more passengers can be transported by the Urbino 18 electric articulated, ordered by the local public transport operator in Warsaw last year. Each of the 130 electric buses can carry up to 133 passengers. The first of the articulated battery-electric buses recently started regular service in the Polish capital, Solaris announced.

Incidentally, the Polish manufacturer Solaris intends to deliver more than 500 ordered battery-electric buses this year. The proportion of electrified buses is rising steadily – and with it their importance for the entire company. The higher proportion of electrified buses is also reflected in turnover: While sales rose by only 21 per cent compared to 2018 (1,226 buses), turnover in 2019 increased by 39 per cent – to 2.604 billion Polish zlotych, equivalent to just over 600 million euros.

Following the above orders from the city of Jaworzno, the local public transport operator PKM again wants to grow its e-bus fleet. This time around, the company asked Solaris to deliver six Urbino 18 electric, Solaris’ largest model.

The batteries boast a total capacity of over 280 kWh, and at the heart of the drive will be the usual electric axle. Just as with the vehicles already used by the operator, the new buses will be charged both utilizing pantograph chargers and conventional charging sockets.

The articulated e-buses will hit the streets of Jaworzno within one year of the contract being signed, Solaris says.

Taking into account the delivery of a total of 43 e-buses from previous orders, PKM now runs 80 per cent of its fleet electrically. “This is a phenomenon on a European scale, i.e. an example of just how to deploy e-mobility in towns with up to 100,000 inhabitants,” Solaris said.

What is more, orders placed by Polish operators now account for almost 40% of all-electric contracts signed by Solaris. The company also quotes a report published by the Polish Economic Institute (PIE) entitled ‘How to support e-mobility’ that sees Poland having the third-biggest fleet of electric buses in Europe by 2025.