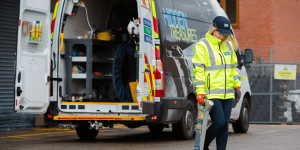 UK water company Severn Trent Water has become the latest corporate to join the global EV100 initiative. The move follows its pledge to convert its entire fleet to run on zero-emission alternatives by 2030.

The firm claims to be Britain’s second-biggest water company and runs 2,200 vehicles. They announced in 2017 that it would switch to alternative fuel vehicles as soon as possible; its first electric vans went live in November that year.

Severn Trent Water now confirmed a target for all vehicles to be electric by 2030 as part of its Triple Carbon Pledge. The pledge also plans for operating with net-zero carbon emissions and generating 100% of its energy from renewable sources.

Plus, the UK Government was the first G7 nation to join the pledge as “Ambassador” reportedly. Through this commitment, the Government encourages large UK businesses to electrify their fleets, also using its international network of embassies to bring that request to companies across the world. The commitment is in support of the UK’s ‘Road to Zero’ strategy that recently has been updated to bring CO reduction targets forward.

Update, Tuesday 12 May 2020: Severn Trent has commissioned EVBox to install the necessary charging infrastructure. EVBox will install a total of 176 charging stations, each with two connections, at Severn Trent’s sites in the Midlands.

Severn Trent awarded the Amsterdam-based charging solution provider the contract only after they had carried out extensive research. EVBox says of the deal that one of the decisive factors in being chosen was that they have introduced OCPP-certified (Open Charge Point Protocol) stations to market. Also important in the decision was apparently the fact that EVBox offers both AC and DC charging solutions.

The installation process with be facilitated by EVBox through online training even before the installations begin. This should provide Severn Trent’s installation partners with the ability to provide comprehensive onsite support.