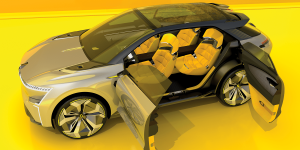 Renault’s planned all-electric compact SUV based on the new CMF-EV electric vehicle platform should be ready for spring 2021. A new media report also alleges that Renault designated the factory to build the new electric car already as well.

It was known that Renault wants to make progress in the field of compact electric SUVs – now the French portal L’Argus provides some more information. The model, internally called BCB, will be based on the Morphoz concept and is to be built at the French Renault plant in Douai and will be launched in spring 2021. In its top performance version, the compact electric SUV should offer a range between 550 to 600 kilometres.

In terms of price, according to the report, the unnamed production model is to be positioned between the DS 3 Crossback E-Tense and the Peugeot e-2008 – but probably more in the direction of the Peugeot. In France, the list prices for this model start at 37,100 Euros. However, L’Argus does not mention a source for all this information.

By the way, the relationship to the concept car Morphoz refers to the basic design and some style elements. The innovative pull-out function, where additional batteries for long-distance drives are retrofitted in unique conversion stations, will probably not make it into the series.

The presentation was originally planned to take place at this year’s Paris Motor Show, which was cancelled in its current form due to the Covid-19 pandemic. Alternative solutions for the car show are currently being sought. According to the L’Argus report, a larger electric Renault SUV based on the CMF-EV platform is also planned for 2022.