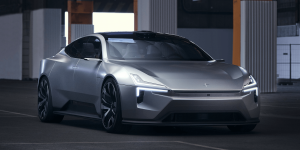 At the end of February, Polestar presented the Precept, as a preview of future electric models. More details were to be revealed at the Geneva Motor Show in March, but since the car show was cancelled, Polestar has now revealed slightly more about the company’s design direction with the Precept.

Polestar‘s Precept should give a foretaste of future electric models of the brand. While the Polestar 1 and 2 are still very much reminiscent of the Volvo design language created by Polestar CEO and Volvo designer Thomas Ingenlath, the Precept picks up on some stylistic elements but has a more independent appearance. “People ask me all the time, ‘what is the future of Polestar?’, and of course we are not showing our future models just yet,” says Ingenlath. “But Precept shows you where we will be heading – our design direction, our ambitions about sustainability and the great digital user experience we will bring with those future cars.”

Polestar chief designer Maximilian Missoni told Autocar magazine that although a production version of the Precept has not been confirmed, it will have an influence on the Polestar 3. “the design language of this car is something you can and should expect in our future cars, starting with the Polestar 3.”

Missoni explained to the German-language online magazine Edison that the concept car gave “a glimpse of a four-door Gran Tourismo Sport of the future”. In the interview, Missoni described the design as Polestar’s “liberation” from its parent company Volvo – both visually and as a brand. In addition to design, Polestar wants to distinguish itself from Volvo with topics such as sustainability and digitalisation.

“The car is not just a dream, it transports ideas with a realistic background,” says Missoni. Examples include the eye-tracking sensor on the dashboard that should open up new operating options for the driver. Or a vegan interior, in which cork, hemp and other natural fibres are more likely to be used. Leather will only be available on request and explicit wish. “Rather than of wood and leather, our luxury is defined by the technologies we will celebrate,” says chief Polestar designer Missoni.

While Edison magazine speculated that the Swedish company owned jointly by Chinese electric car giant Geely and Swedish vehicle manufacturer Volvo, wants to position the car as Polestar 4 from 2022 on as a competitor to the Tesla Model S, among others. Polestar has, in the meantime, specifically demented these assumptions. In response, a Polestar spokesperson told electrive that this kind of speculation possibly “leads to wrong conclusions.”

Although it is clearly too early to speculate about production intentions for Polestar 4, the series production of the Polestar 3 has already been scheduled and the performance SUV Polestar 3 is planned to launch at the end of 2021. And according to Polestar, we should allow the Precept to give us an idea of the direction of their future design – starting with the Polestar 3.

Škoda Citigo-e iV sells out fast in the UK