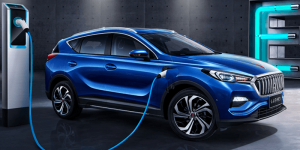 The Chinese car manufacturer FAW has begun construction on a new plant in Changchun, where electrified cars are to be produced for its premium brand Hongqi. Completion of the plant, which will have an annual production capacity for 200,000 vehicles, is scheduled for 2022.

According to Chinese media reports, the total investment amounts to 7.8 billion RMB, the equivalent of almost one billion euros. A few weeks ago, FAW already started construction of an innovation and test center in Changchun in the northeast of China. The estimated cost for this project is around 350 million euros. The center will be used to develop and test new energy vehicles and intelligent networked vehicles that will later roll off the production line in the new plant.

As reported, Hongqi is planning 15 electric models by 2025, and currently Hongqi is only offering one fullly electric model, the electric SUV E-HS3. Although Hongqi only accounts for around five per cent of FAW Group sales, the brand was able to increase sales by 87 per cent year-on-year in the first quarter, to 25,001 vehicles sold, despite the Covid-19 pandemic. Experts attribute this to the rapidly growing model range. By 2018, only two models of the brand, which was introduced in 1958 as a limousine brand for government agencies, had been sold – six in the meantime. The large H9 sedan is due to launch in June, followed by a series of electric models.

Last year, Hongqi reached the 100,000 unit mark and plans to double this figure this year. To this end, the existing plant (also in Changchun) was expanded this spring, with capacity now at 150,000 vehicles. When the new plant is completed, the total capacity will be 350,000 vehicles per year.